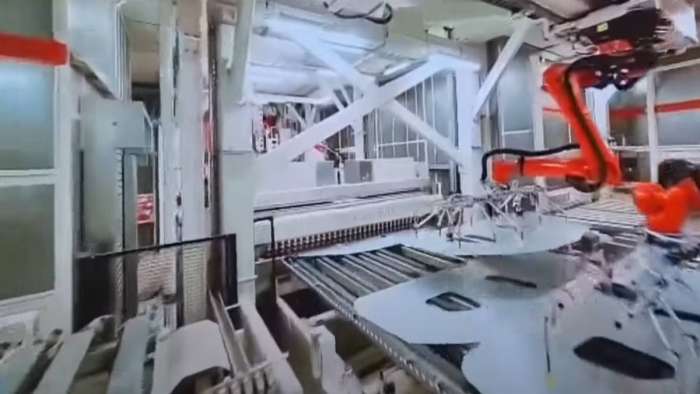 This is a very recent video of Giga Berlin as we see the entire production from start to finish of a Tesla vehicle. It's a cutting edge facility utilizing the latest technology.
Advertisement

We have an incredible video from inside Tesla Giga Berlin showing the entire production process. It's shared from a Tesla drone it looks like and we see the drone fly into a place where metal plates with holes are being put on an assembly line.

We then see large castings being stamped in a rapid fashion. As the drone continues to fly, you see more of the stamping process for the castings and then there is a conveyer belt they are on.

After that, you start to have human intervention in the assembly line doing various things. Finally, the car is dipped in a paint substance and moved forward to be sprayed with paint machines. People then work on polishing and putting the insides of the car in.

After that, the seats are put in, and all the other parts of the car, until finally, you see fully assembled cars ready to exit the Giga Berlin factory!

Big factories like Giga Berlin are amazingly complex and there seems to be a crisis every day. Tesla has been able to overcome these so far. In one case, there are still environmental groups trying to close down Giga Berlin.

After two years of construction, Giga Berlin is now opened up. The federal government of Germany and the state of Brandenburg are now celebrating the opening of Giga Berlin. One interesting fact about Giga Berlin is that it cost $5.5 billion for Giga Berlin to be built and Giga Texas was about $1.1 billion. Interesting cost difference and I would be curious to know if anyone knows why there is such a big difference.

What did you think of this video inside Giga Berlin? Will Giga Berlin add on more to this existing factory?