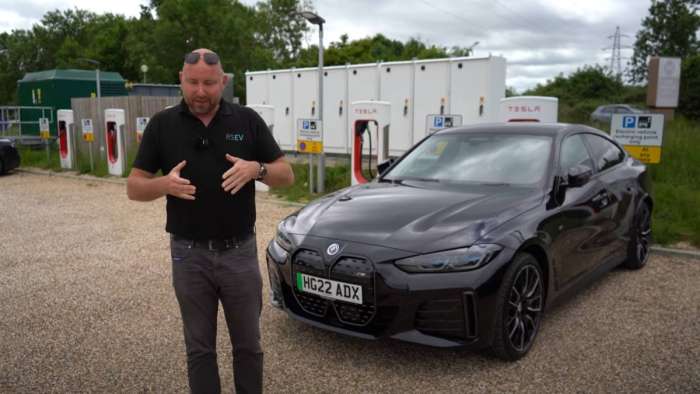 How to Charge Your Non-Tesla at a Supercharger

How to Charge Your Non-Tesla at a Supercharger

There are a number of Tesla super chargers in many locations in the world, however, there are non-Tesla charging stations available too. How do you charge a non Tesla vehicle at a Tesla super charger and what are the do's and don'ts?

This video is from the UK and from RSymons RSEV and there are 15 super charging stations in the UK. One of the first things you need to do is download the Tesla app and register your car there. There is a charge your non Tesla option on the app.

For a few things you should do and should not do, for a Tesla, it's in the rear left hand corner. You back up into the charging stall. For a BMW charger which is in the upper right, you should pull straight in so as not to stretch the cable too much.

This owner of this vehicle in the UK is taking up two bays in order to charge his car. Charging at the end of the row or where you won't take up to bays is a good idea. You also want to be careful how you back up so that you don't back up into the super charger and cause damage.

Next Steps to Charging Your Non Tesla

The next steps for charging you non Tesla vehicle are to pick a site on the site where you won't take up multiple spots and to make sure your charging port is near the charging station. The next step is to open the charge port and you'll come to a V2 super charger, which is an original charger.

Don't try and use other cables to join one to another. There's been pictures of cables joined to each other. That won't work. Use the CCS connector only. On the Tesla app, select the stall # of the super charger you are at. In this case, the owner picked his stall. You also want to avoid parking next to someone at the super charger or you might charger slower. This owner selected 3B and started charging.

This created a charging BMW at a Tesla super charging. The Tesla super charger may take up to two minutes to begin charging. The rates vary at each site, but the app will tell you what the charges and rates are. The car started charging in about 30 seconds. The charging rate was 62 kW and then to 142 kW. It got to a maximum of 150 kW. The cost ended up being 60 pents per kWh. The owner didn't want to spend too much time charging in order to find cheaper charging.

You can sign up for a monthly charging payment which will reduce the cost to charge at a Tesla super charger. There are other charging network apps that allow you to use CCS charging that will give you a different rate. If you can charge at home, that's even better, but if you live at an apartment or condo, you'll likely need to use external charging.