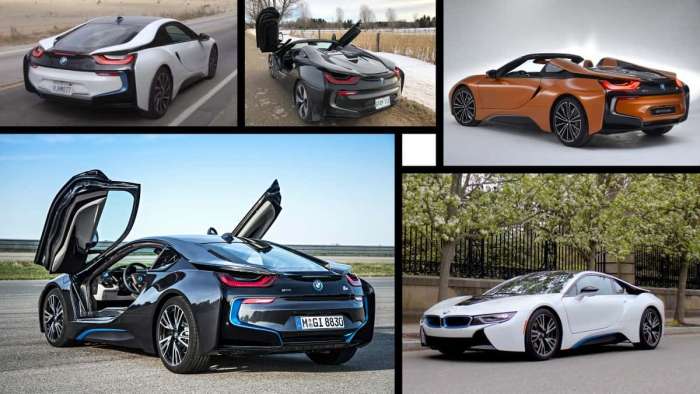 The BMW i8: Eight Years Of Turning Heads

The BMW i8 has sleek lines and aggressive styling cues that scream expensive taste. The sports hybrid has been turning heads since 2013 and is almost everything that I want from an electric vehicle. It’s sleek, it’s sporty, it’s got enough batteries to do quick jaunts around town but still has a gas powerplant that allows for more flexibility. This amazing piece of European Engineering sings its alluring siren song, and I am caught in her trance.
Advertisement

The i8 was BMW’s answer to “what will the future hold” in 2013, when it was announced and its beautiful butterfly-style doors and swooping curves stole the limelight. Even nearly a decade after being first granted life, the i8 is still one of the most stunning vehicles powered by an electric motor, albeit not for its performance statistics. It may not have the rip-roaring speed of the real electric race-cars like the Porsche Taycan, but it’s also using technology that first saw the light of day at the very beginning of the electric revolution, around the same time that Tesla’s first Roadster hit the pavement.

BMW’s i8 is fairly interesting in how it manages its hybrid drivetrain because it powers its front wheels with an electric motor, but its rear wheels are powered by a small 3-cylinder motor and an automatic transmission. With both of its motors combined, the i8 puts out a surprisingly low (for a sports car) 369 horsepower, but still manages to sling itself up to 60 miles per hour in a respectable 4.1 seconds. This is because of the instant torque available from the electric motor as the coupe itself isn’t particularly light with a curb weight of 3,394 pounds, between 500 and 1000 pounds lighter than a Dodge Challenger.

Butterfly doors add pizzazz and flash and make a statement when they open, but they also make getting in and out of the low-slung vehicle somewhat interesting. Most folks take a one-leg-in-first approach to slide into the deep cockpit, but like any activity, it gets easier with practice. More flash is added by the dazzling blue accents that grace certain fascia of the i8, and the i8 also has several Lighting accents that may be changed from blue, orange, or white.

BMW, true to form, has gone out of their way to court the petrol-head by amplifying and adding engine sound that’s played through the vehicles speakers to simulate the roar of a more powerful vehicle’s engine. That little 3 banger isn’t singing any real concerts, but driving the i8, you wouldn’t know it, especially in sport mode, both motors chugging along to tear down the road with reckless abandon. I bring up the engine noise perk because it’s something that I felt is a little quirky and decidedly BMW, as I remember the tuning forks that dad kept in his tool box for working on his Bimmer and mom’s Porsche 944.

So, if you’ve got around $150,000 to spend and you’re in the market for a 2 door vehicle that gets excellent gas mileage (around 70 miles per gallon), the i8 might be the car for you. It’s got the kind of looks that you might expect from a concept car, or a science fiction movie or video game, rather than the subdued, pedestrian look of most of the coupes and sedans that wander the roads and highways more frequently today. Until the iM2 or the i4 M come out, this is BMWs answer to the electric sportscar and I for one, want one in Crystal White.

DeanMcManis wrote on May 9, 2021 - 4:25am Permalink
The BMW i8 has long been one of my favorite cars ever built. BMW was able to capture the design excitement of a concept car in a real production vehicle that you can actually own and drive. I wonder how BMW got this beauty so right when they made the styling so awkward in it's i3 (and iX) brothers. One important point that I didn't see in your article was that the i8's production was stopped a full year ago. The good side of that sad news is that it means that you can find low mileage used i8s for under $70K today. Which is amazing for such a special car.