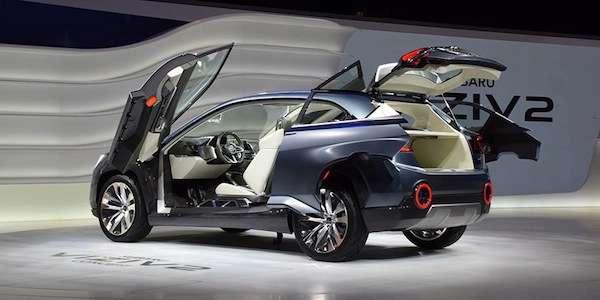 The new Subaru VIZIV2 Concept has been unveiled at the Geneva Motor Show 2014 today with a new twist.
Advertisement

Who would have imagined a Subaru SUV with gull wing doors? That’s what the new Subaru VIZIV2 Concept comes with. Again we see Subaru bring an outrageous concept car to a major auto show with little or no chance of ever making it to production. It’s just a fun futuristic look at what Subaru designers can dream up.

The Subaru VIZIV2 Concept breaks every rule the Japanese automaker has come to be known for. Except for the two-door coupe BRZ, they build practical, useful multi-use four-door SUVs, crossovers and sedans. The two-door VIZIV2 Concept breaks all the rules and it will never see production. The only thing we see on the new concept car that keeps with Subaru tradition is that it’s definitely an all-wheel-drive vehicle.

The biggest surprise of the new VIZIV2 Concept are the doors and Subaru calls them “butterfly” doors. But don’t expect to see this on any Subaru in the future. Subaru has a long tradition of developing great concept cars that don’t actually look anything like the production version. In the case of the VIZIV2 Concept, the design will never make it past this show.

But we can expect the VIZIV2 Concept to show us a few things that will make it to production. It features a new-generation Symmetrical All-Wheel Drive system and it’s mated to a drivetrain “that brings capability and sustainability into harmony.” The VIZIV2 Concept comes with a new plug-in hybrid electric system that pairs a gas engine with two powerful rear electric motors with vectoring. This is a system Subaru is working on developing. We will likely see this powering a new Subaru SUV in the future.

Another feature we know fits into Subaru’s core beliefs, is the concept SUV features a next-generation EyeSight system with stereo cameras that can detect emerging traffic conditions. The revolutionary system combines with 360-degree sensing for autonomous driving. Subaru is all about safety, and this system will make it to production sooner rather than later.

We know that Subaru will never produce a two-door SUV with “butterfly” doors. But they will be working on a new multi-use vehicle with a plug-in hybrid electric propulsion system. And the next-generation EyeSight safety system could be developed for autonomous driving. Both these Subaru VIZIV2 Concept features give us a good idea of what the Japanese automaker has planned for the future.

Other Subaru stories of interest.