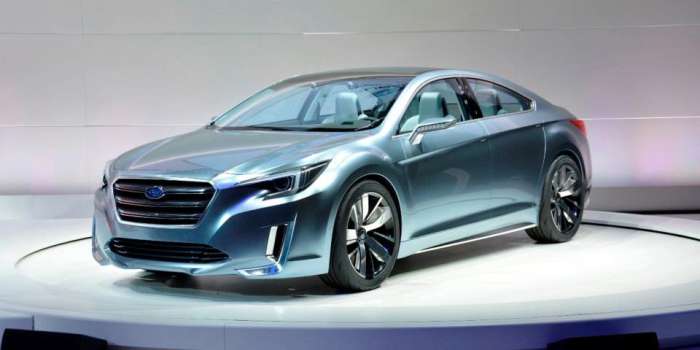 Don’t expect 2015 Subaru Legacy to look like the concept

The 2015 Subaru Legacy won’t look much like the concept. Subaru executives say they will not try to keep up with the major automakers but will focus on what made them successful.
Advertisement

Will Subaru actually bring the next-generation 2015 Legacy sedan to production that looks anything like the concept we saw in LA? With the unveiling of the new Legacy Concept at the LA Auto Show, there has been speculation that Subaru will try to gain a greater market appeal with the next-generation 2015 Legacy. Most savy business people would say Subaru should change their styling to appeal to a larger audience, but Subaru is not your average business. Company executives say it’s probably not likely to happen.

In an interview with WardsAuto at a design seminar at the LA Auto Show, company representatives said don’t look for major design changes at Subaru. Just like the recent 2015 WRX design that left some fans and many auto journalists disappointed, the new-generation Legacy likely won’t see drastic design changes.

Subaru happy with their niche market

Subaru is growing, but they don’t want to grow too big. Michael McHale told WardsAuto, “We’re quite happy being a little unique and selling around the numbers we’re selling now, just a few more.” And the Japanese automaker is happy with the niche market they have carved out for themselves. Subaru isn’t your typical automaker.

In the interview, Company execs in the U.S. and Japan said Subaru is “not willing to tool around with Subaru’s strong position in the CUV and compact-sedan segments in hopes of earning wider market share.” The recent spy photos of the next-gen Legacy show this to be true. The prototypes that have been seen in Europe feature a familiar Subaru rectangular front grille and C-shaped taillights. It looks like the new 2015 Legacy will receive a significantly toned down design.

The brand of choice for active millennials

Like it or not, Subaru is a very conservative company and won’t do anything to alienate their current loyal fan base. They want to “be the brand of choice for what Michael McHale says is “adventure-seekers.” This is the millennial group who is active and uses their car to commute during the week and use their Subaru for excursions on the weekend. They are into mountain activities and water sports.

There is an estimated 80 million millennials in the U.S. alone and McHale estimates 6 million of those fit Subaru’s target demographic to buy their multi-use vehicles like the new Forester and XV Crosstrek models. “So, why, would the company need to shift its focus away from them?” He asks.

So we shouldn’t expect Subaru to look much farther beyond the niche it’s historically cultivated. They are not going to chase the huge automakers by creating a 2015 Legacy that will compete with the Camry’s and Accords of the world. It’s going to stay with its core values that has proven to be successful for the brand and the well-known symmetrical all-wheel-drive setup.

Tomohiko Ikeda, former president and CEO of Subaru of America and current chief of global marketing, said in the interview, that Subaru “strives to set itself apart as best it can with the resources it has, not join the fray near the top of the automotive leader board.”

Don’t expect the 2015 Subaru Legacy to look like the concept that made its global debut at the Los Angeles Auto Show 2013 last month. Subaru knows where their loyal fans are coming from and will continue to develop that unique customer base with vehicles that are practical for that demographic. Stay tuned to Torque News for the latest Subaru news.