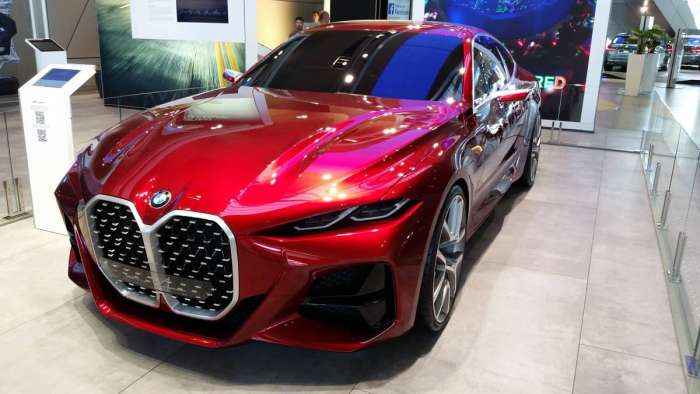 The Range of The 2021 BMW i4 Is Revealed Including Horsepower

BMW is going to introduce a proper competition to the Tesla Model 3 with the arrival of i4. Meet the electric BMW i4 sedan, which is reportedly coming in 2021 with 530 horsepower and 373 miles of range per single charge.
Advertisement

A few weeks ago, Torque News was in Munich in a tour inspired by the German Trade and Investment group (GTAI). As part of the tour we visited the BMW Welt, which is a combined exhibition, delivery, adventure, museum and event venue, located next to the Olympic Park in the immediate vicinity of the BMW global headquarters in Munich.

BMW i4 in BMW Welt
The BMW World is the most popular tourist attraction in Bavaria attracting 3.5 million visitors a year. Every possible BMW in all markets are presented here. Restaurants and cafes make it a desirable attraction for tourists.

And there in the center there was this beautiful red color BMW i4 concept, which was very prominently presented in the exhibition. 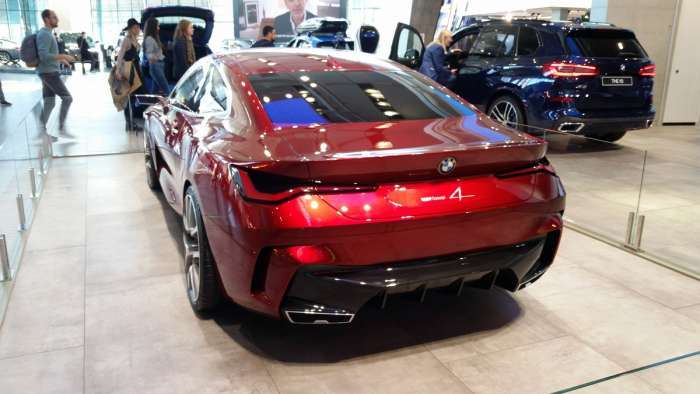 You know, the problem with concept cars is that not every concept car becomes a production car. But as prominently as the BMW i4 was presented you could say that BMW was taking pride in it and as i8 is going away, the i4 will continue BMW’s electric legacy. It was clear BMW had big plans for i4 and they wanted visitors to note this.

BMW i4 Range, Speed and HP

As Roadshow learned yesterday the BMW i4 electric car will go into production in 2021. This will be BMW's answer to Tesla Model 3. It will be powered by an 80-kilowatt-hour battery, producing 530 horsepower. The BMW i4 EV will accelerate from 0 to 60 in 4 seconds and will have an impressive 373-mile range per one charge. It will develop a speed of 120 MPH.

BMW is making a huge offensive with its plan of 25 electric vehicles. By the year 2023 BMW will have 25 electric vehicles in the market. Interestingly, BMW planned to achieve this goal by 2025. But now, seeing how popular EVs are and how consumer demand is rising for EVs BMW revised its plan to achieve its EV goal from 2025 to 2023. The company wants to achieve this goal 2 years faster and put EVs in the market earlier.

Imagine, in the next 3 years we will see 23 electric BMWs on roads. This is a tall order.

70 percent of BMW‘s electric customers are first time BMW buyers. The world is changing, and BMW thinks the e-mobility is a totally new market for automakers.

The BMW i3 was the company's first zero emission mass-produced EV. The i3 was a new and a huge step for BMW. But things are evolving very fast for the German leading automaker. In the next couple of years BMW will produce EVs that will reach 400 miles. Therefore, it’s not surprising that the BMW i4 will have a 373 miles of range per charge.

In Munich we were told that BMW is working on a new generation of batteries. It’s possible to build batteries with longer range, but we were told regarding battery making you need to consider the environmental impact. EV batteries come with a cost.

BMW says that, on a 150-kW DC fast charger, the i4 should be able to achieve an 80% charge in about 35 minutes. For comparison, BMW notes that the i4 can add about 62 miles of range in about 6 minutes, while it takes the current i3 hatchback about 17 minutes to do the same.

New and more efficient battery technologies will keep the EV range anxiety in check and contribute to more widespread adoption of electric cars. I am expecting BMW i4 to seriously disrupt the EV marketplace seriously challenging the existing electric cars with its range, attractiveness and appeal. What about you?

Please, comment below about what you think of the new 2021 BMW i4, its specs and range and see you in the next story.

John Goreham wrote on November 15, 2019 - 10:34pm Permalink
Great story. I suspect that the next few years will be transformative for the premium performance market with electrification becoming the default drivetrain. I found your comment about the battery's environmental footprint very interesting. Folks are going to start to awaken to the fact that a little black box that promises a great environmental result isn't meaningful if the little black box is made in a way that generates pollutants, is made with critical ingredients mined by children, and created in a factory powered by coal. BMW's i3 plants were forward-thinking in this regard.
Armen Hareyan wrote on November 15, 2019 - 10:48pm Permalink
Thanks a lot John. I appreciate it. In Germany BMW engineers told that the technology is there to make batteries that will give EVs longer range, however it comes with an environmental impact that should be taken into serious consideration. This is why the industry is working on a new generation of batteries that will have a softer impact on the environment.
DeanMcManis wrote on November 17, 2019 - 1:03am Permalink
The i4 sounds promising with tons of power and range, but 2021 is a long time to wait. And Tesla certainly will not be standing still while BMW develops and starts to produce this new i4 over the next year or so. I was not unhappy to see the i3 go away because BMW had already announced better BEV replacement models, and happily ones that would look better than the awkward i3. I do hope that the gigantic, dorky grill is long gone once the new i4 BEV hits showrooms.
T. Coates wrote on November 18, 2019 - 11:34am Permalink
23 Electric cars by 2023 is a tall order, but I think are two mistakes in the article. The number of cars by 2023 is 25, as you state earlier in the article. The bigger error is that BMW originally announced 25 “electrified” vehicles, of which 13 would be electric and the other 12 would be plug-in hybrids. That’s still a tall order, but much less tall and more easily achieved.
R K wrote on February 12, 2020 - 1:37am Permalink
Some of the information you have written in the article about the i4 is correct, however, the pictures of the red car you claim is the concept i4 are NOT of the i4 at all. The red car is the "Concept 4"....not Concept i4. It is the Concept version of the upcoming 4-series 2 door Coupe. There will also be a 4-series 4 door coupe (GranCoupé) coming out next year. The i4 will be partially based on the 4-series GranCoupé. Again, to clarify.....the red 2 door Coupe pictured here is the concept of the upcoming 2 door 4-series coupe...it is NOT the concept version of the 4 door i4. I suggest you correct the article and remove any references to the i4 on the pictures and video of the red Concept4 to prevent spreading wrong information and confusing people.