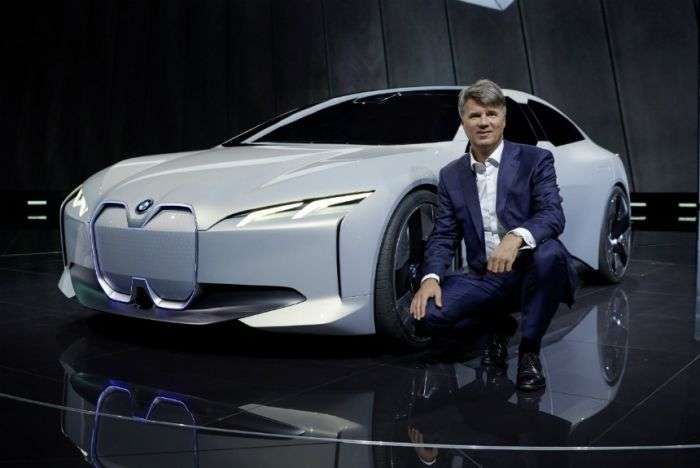 BMW i4 or a Tesla Model 3: BMW's long-awaited i4 will be with us in 2020. A BMW i4 sedan will be one of 12 electric cars the BMW Group will introduce by the end of 2025. The specs and release date of the all-electric BMW i4 is known.
Advertisement

The highlight of the BMW program at the Geneva Motor Show was the new X4 crossover and the concept sedan of the M8 Gran Coupe . However, no less interesting were the statements from the company's top managers about the upcoming electric models.

Thus, Harald Kruger, the head of BMW group, finally unveiled the name of the future purely electric sedan. The car will be called BMW i4, and it will be based on the BMW i Vision Dynamics concept, shown last fall at the Frankfurt Motor Show. However, it is by no means a fact that the serial car will preserve the appearance of the concept and its estimated characteristics: 372 miles of range per charge, a maximum speed of 125 miles per hour and a 0-60 acceleration in 4 seconds.

Much more important is the location of the i4's manufacturing. It's said that the BMW i4 will not be manufactured in Leipzig, but at the company's headquarters in Munich. As Torque News readers may know, BMW i3 and i8 electric cars are made in Leipzig.

Munich specializes in the production of BMW's Series 3s and Series 4s. Therefore, BMW i4 will be made on the platform of Series 3. Thus, BMW is following the path of Daimler, adapting all its factories to flexible production of both traditional and electric cars. In other words, a plant must be able to produce both ICE and electric cars regardless of its location.

According to BMW the production version of i4 will be one of 12 new all-electric models it plans to launch by 2025.

According to preliminary data, the launch of the BMW i4 was expected in 2021, but Kruger's statement may indicate a reduction of time and the BMW i4 may arrive sooner than 2021. We don't know the price of i4 yet, but Tesla better hurry with the deliveries of its Model 3.

Peter Schwarzenbauer, a BMW board member said that the Mini EV will definitely come earlier than i4. Speaking of the prospects of the company in Geneva he said that Mini EV will be produced in China.

Last month the Bavarian car maker signed a protocol of intent with Great Wall Motors Company Limited, which is a Chinese automobile manufacturer headquartered in Baoding, Hebei in China. However, even if nothing happens from this alliance, BMW will find another site.

After all, according to the terms of the Chinese authorities, government subsidies are only for electric vehicles with local components. The Chinese market is expected to become the main consumer of Mini EVs.

Do you think BMW's i4 EV is Tesla Model 3's most serious competitor so far? Please, let us know what you think in the comments section below.

Mick wrote on March 8, 2018 - 3:50am Permalink
Why so ugly? Can’t car companies just make a straightforward electric car that doesn’t look like it comes from the set of a dystopian sci-fi movie?
scot wrote on November 5, 2018 - 10:57pm Permalink
Get a clue. They WOULD LOVE to be able to produce that car in the form of the prototype. They unfortunately will produce another boring sedan that Tesla will continue to eat for lunch.
Ottmar wrote on March 8, 2018 - 10:06am Permalink
Our problem to date is that NO car company, besides Tesla, is 100% committed to EV’s! It’s a BIG show of being able to but not really willing. What is needed are not only cars in the showroom but charging stations across this Planet. WE NEED CHARGING STATIONS AND A NORM FOR PLUGS. THOUGH FAR. TESLA HAS THE MARKET CORNERED! If they would manufacture a $10,000.00 Car, with the possibility to upgrade, interior as well as exterior and performance/range ( which is not an impossibility), it would change the Car Industry as it exists
Michael wrote on March 8, 2018 - 10:07am Permalink
Lots of announcements, but not much to offer right now. Each day GM and Tesla produce EV's is another day further ahead of them.
Johnny mars wrote on March 8, 2018 - 6:38pm Permalink
The Bolt EV is the competitor for the Tesla Model 3. And by 2025, who knows if Tesla will still be in business.
Darren Suprina wrote on March 12, 2018 - 6:55pm Permalink
Decided not to wait for the Tesla 3 after test-driving the Bolt. Nice performance, good range, fun tech... available now. I wish Tesla luck, but it’s time for them to put the peddler to the metal if they want to avoid “competition hell” as so many planned EVs, or at least the cheaper Chinese vehicles, come to the broad market. Was in a BYD EV taxi in London and it was reasonably appointed. A few improvements and they will Tesla a real run for their money.
scot wrote on November 5, 2018 - 10:55pm Permalink
BYD has never been able to get a SINGLE vehicle into the US.