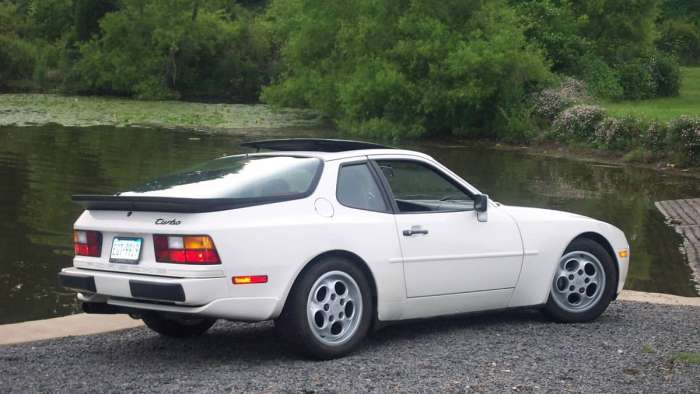 The 944 Will Satisfy Your Porsche Needs, Don't Break The Bank

In recent years, a resurgence has come about from the depths of car owners’ nostalgia, stemming from a love for the analog sports car experience. You can blame that for why you see every 85’ guards red 911 Porsche Carrera for sale on bring-a-trailer for 85,000 big ones. Not to discredit the purity and timeless lines of a G series 911, however, it does depress the kids that grew up in the 70s and 80s who see their poster child drifting further out of range every year.
Advertisement

If you find yourself running out of options, I offer you the Porsche 944.

From 1982-1991 the 951 code car more well known as the 944 was built in larger numbers than the company’s more expensive counterparts and it was Porsche’s attempt as an entry-level sports car that wouldn’t compete with its own big-hitters like the 911 Turbo and Turbo S. In earlier model years the car spotted a 2.5 liter inline 4 that made 150 horsepower and 142 lb-ft of torque.

That motor was found in the tamer, naturally aspirated 944 coupes in the early and mid-80s until they announced the Porsche 944 Turbo and Turbo S that made 250 horsepower and 243 lb-ft of torque by the end of its run in 1991. Being designed for unparalleled handling, the power wasn’t the selling point. It was the perfect 50/50 weight distribution, the tight and masterfully damped suspension, the direct steering, and the overall driving experience.

I owned a 1985.5 Porsche 944 coupe for a year and a half. I was happy to sell it to a caring owner but after several years without it, I realize it was the best car I ever owned. It had over 150,000 miles and started each day with such eagerness and ran like a miniature track toy. The Miata-ness of the car begs the question, “why would I need more power?”

You don’t! The 944 is a miniature python. Drop a gear, dive into that corner, and it will strike hard. It sheds its skin of comfortable seats and daily drivable suspension only to emerge with tight cornering and predictable rotation, allowing you to barrel into the smallest of hairpins at speeds that many other cars wouldn’t dare try. Then all is settled and you look down at your interior to find you are still piloting a 150 hp 944 and by the way, you can go to the store and fit a week’s worth of groceries under the hatch.

The power isn't a problem in terms of what the car is designed to do, which provides a pure driving experience at a substantially lower cost than its bigger siblings with 300 hp flat sixes. It does suffer on the freeway on-ramps and getting that gap in traffic that you desperately need. But if you are hurrying to your destination without the stopwatch running, you shouldn't be driving a 944. The capability is there. Just enjoy it. It can outrun cars way above its paygrade while putting a stupidly big smile on your face.

How To Own Your Porsche 944

The 944 combines a critical necessity with a critical desire. A low price, and a pure, analog driving experience. If you aren't extremely affluent, why spend so much money for a car you will take to cars and coffee every second Sunday of the month when you can spend 5-10 thousand dollars on a classic that provides the same euphoric purity and begs to be driven every day. There are so many of them that it allows the price of them to remain low and the variety to remain high. Yes, you can go online and find a sapphire blue 944 turbo for $10,000, Or you can find a burgundy 944 coupe for $5500.

Reliability remains strong… depending on you. Those inline 4 blocks can take a beating, or two, or fifty and not fall down, but it's the small stuff that Porsche made delicate and dainty. The timing belt and steering racks historically can go bad after a hundred thousand miles, and with a Porsche, the small stuff will add up. Parts are not cheap and not exactly an air cleaner installation on your 62’ Fairlane.

The involved work on a 944 can take several days with one person which explains the gasp-accompanied labor bills. Everyone knows that german cars and especially the old ones are expensive to fix but what everyone doesn’t know is the few skills that will eliminate your worries of a valve cover-off repair. Know the right amount of water or coolant to put in the holding cell. Know the right oil for your engine and check it frequently. Maybe refrain from bouncing it off the rev limiter in a high school parking lot at night while going in circles. I learned that it comes down to a simple value. Treat the car like a 30-year-old Porsche would like to be treated. Just get into the garage and do it. You will be happy that you did when the radiator hose doesn't explode and create a plume of smoke over your local Safeway parking lot (Happened to me)

There is no doubt a bias to the pedestal I put this car upon, however, I remain in awe as someone who only owned American and Japanese cars before. No matter if you love or hate Porsche, the 944 was a car that remained a comfortable and engaging choice for car lovers in a time where Mazda Rx7s were exploding left and right, and the Z cars were scraping their door sills on the tarmac at a track day.

See you in my next story discussing the custom new and old Porsche 356 Zagato Coupe.

Toyota's First EV Will Have a Name of BZ: Toyota BZ
First Videos From Inside The Boring Company's Las Vegas Loop
END_OF_DOCUMENT_TOKEN_TO_BE_REPLACED