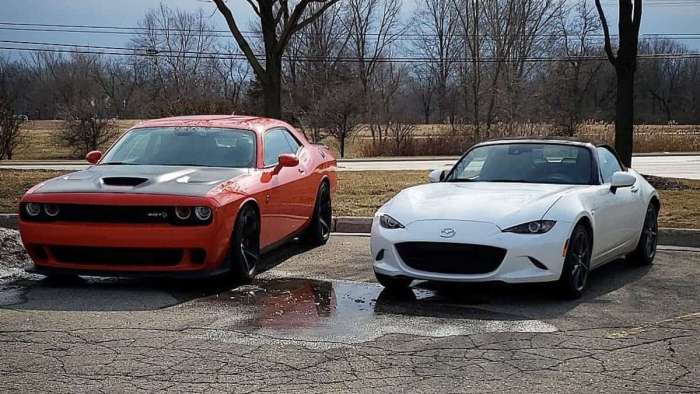 Many muscle car owners downplay the fun-to-drive factor of small cars like the 2019 Mazda MX-5 Miata, but after spending a week driving one back-to-back with my Dodge Challenger SRT Hellcat, it is easy to see why this small car has been so popular for so long.
Advertisement

In the American automotive world, the most talked-about performance cars are the Dodge Challenger SRT Hellcat, the Ford Mustang Shelby GT500 and the mid-engine C8 Chevrolet Corvette, but since the 1980s, the Mazda Miata has consistently been one of the most popular sports cats in the US market. Frankly, the Miata is and always has been the polar opposite of the popular American performance cars, focusing on low weight rather than big power.

As a result, the Miata has sort of become the ultimate anti-muscle car, shining brightest in performance venues where the American cars have traditionally struggled. For example, an autocross event or a road course event on a tight track is likely to be dominated by Miatas while American muscle cars would struggle to compete, so any driver whose key focus is big power and straight-line speed is likely to frown upon the likes of the legendary Mazda roadster.

However, while I current own three V8-powered muscle cars – one of which is my daily-driven Hellcat Challenger – and a V8-powered pickup, I can appreciate the qualities of a small car that sticks to corners like it is on a rail, so anytime I have a chance to test the Miata, I look forward to that seat time. For a week, I switched back and forth between my supercharged Dodge with more than 707 horsepower and 650 lb-ft of torque and the 2019 Mazda MX-5 with 181 horsepower and 151 lb-ft of torque. 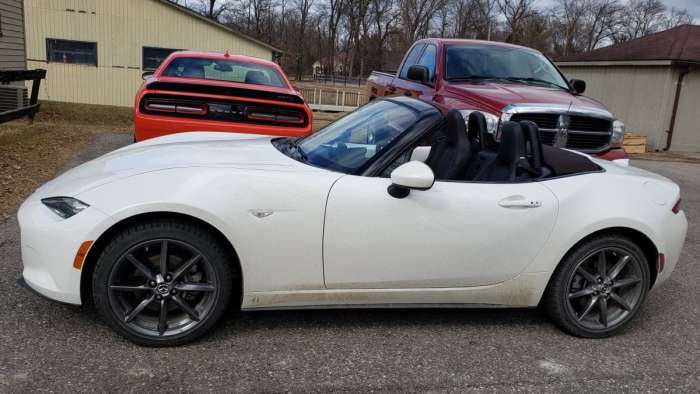 Mind you, this is not a comparison but rather, I mention my Challenger as a frame of reference and to show that someone who loves one of the mightiest muscle cars can also have a whole lot of fun in the Miata.

Sizing Up the 2019 Mazda MX-5 Miata
As mentioned above, the 2019 Mazda MX-5 Miata is delivers 181 horsepower and 151 lb-ft of torque from a 2.0-liter, naturally aspirated four-cylinder engine. That power is sent towards the rear wheels by means of a 6-speed manual transmission which allows the 2,300-pound convertible to zip from a stop to 60 miles per hour in the high-five-second range while covering the quarter mile in the mid-14-second range. For comparison, my Hellcat Challenger packs more than 707 horsepower and more than 650 lb-ft of torque, tipping the scales at roughly 4,500 pounds, dashing to 60 in 3.7 seconds and covering the quarter mile in the low-11-second range. 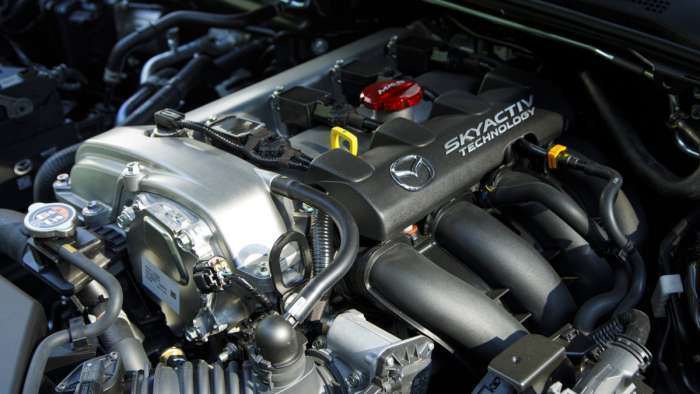 Perhaps those are the numbers that many muscle car owners look at when discrediting the Miata and frankly, if your key concern is low-end acceleration, quarter mile times and dyno numbers, the MX-5 probably isn’t for you. However, if you can appreciate the excitement of banging through gears and tossing a 2,300-pounds car through every turn with confidence, the Miata is a ton of fun to drive. Granted, it is a very different kind of fun than you get with the likes of the Hellcat, but it doesn’t take long to see why so many people have purchased a Miata in the past 30 years.

Hard Dig with the Miata
While those power and acceleration numbers mentioned above aren’t impressive compared to the premium American performance cars, we need to keep in mind that the MX-5 starts right around $30,000 and for that price, the Miata offers a ton of bang-for-the-buck. 2.0-liter Skyactiv four-cylinder engine is quick-revving, so when you launch from a stop, the run up through the gears is quicker and more exciting than many cars with a similar price tag. Again, the MX-5 is not designed in any way to be a straight-line performance car, but at the same time, it isn’t a bore to hammer-down from a stop. The manual transmission makes getting through the gears easy under hard throttle, so with the lightweight nature of the vehicle, most drivers will enjoy a spirited blast from a stop.

Needless to say, under normal driving circumstances the Skyactiv engine provides plenty of power for highway merging and passing, offering the sports car feel that you would expect in every driving situation.

Proper Sports Car Feel
In short, the 2019 Mazda MX-5 doesn’t offer muscle car-like acceleration, but this isnt a car that was designed for that sort of performance and even with that in mind, it is still fun to rip away from a stop in the newest Miata. Where the MX-5 is and always has been designed to shine is on twisty roads and for the price, there are few cars in the American market that will carve through the corners like the legendary Miata.

On tight, alternating turns like those you would come across on a twisty country road, the MX-5 is perfectly flat and stable as you cut from one direction to the other. On longer, sweeping turns, you can push the car hard without no body roll and while pushing hard enough will lead to some understeer, as long as you can keep the nose in, you can power through sweeping turns with confidence. 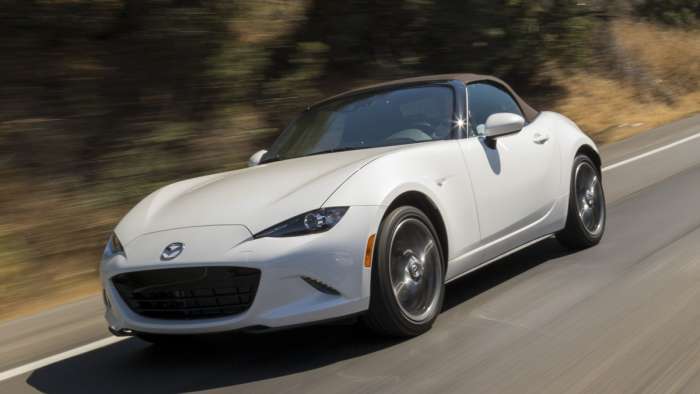 The steering system is very acute, so inputs at the steering wheel lead to precise movement at the wheels without any feeling of disconnection and in the rare event that you get into a turn too hot, the MX-5 braking system grabs hard and gets the car down to speed in a hurry.

I feel that comparing the Miata to a golf cart is an insult, but I don’t mean it to come across like that at all. In the same way that a go kart affords the driver a very connected feel through the steering wheel and the suspension, the MX-5 provides a similar feeling of stability, connection and control on the open road. That connection is often lost with many modern sports cars that put too much emphasis on muting the feel of the road, but while Mazda continues to improve both the handling characteristics and the driving dynamics of the Miata, the engineers have done so without removing the raw feeling of control that is so crucial.

For some people who don’t appreciate the connection to the road, the Miata will feel very stiff on the open road. For those folks, there are plenty of sports cars on sale today that offer a smoother ride and less feel for the road, but those cars simply don’t get give you the feel for the road that I enjoyed with the MX-5.

Loving the Cockpit Feel
In addition to providing the on-road feel of a proper sports car, the 2019 Mazda MX-5 Miata cabin follows suit with a layout that encapsulates you in a surprisingly well-appointed cockpit. The Miata generally doesn’t get much credit for being generously appointed inside, but it comes with a large infotainment screen mounted high on the dash that offers control of every interior function from a knob mounted on the shift console. When your hand is on the shifter or when your elbow is on the armrest, the knob is right near your hand, allowing you to make changes to the sound system or navigation without reaching up to the dash. At the same time, the climate controls have traditional controls, so you don’t have to hunt around in a screen menu to adjust the temperature. Of course, there are also controls on the steering wheel to change the radio station or volume, to switch the information displayed in the gauge cluster, to access the hands-free phone system or to engage the cruise control system. 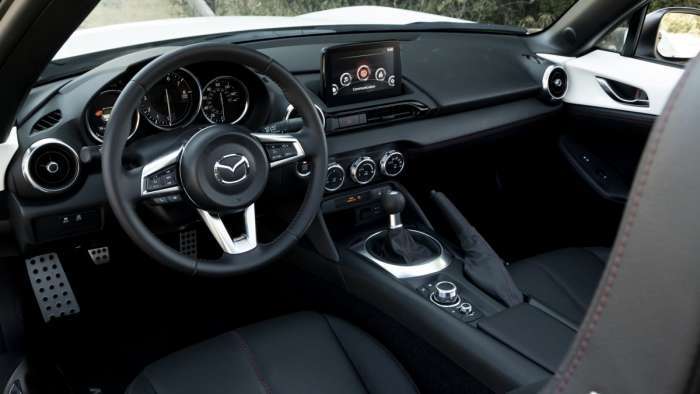 For someone who prefers a cabin with a ton of room around the driver and passenger, the Miata might be a bit too snug, but for such a compact sports car, there is plenty of room to stretch your legs. Critics will complain about the lack of interior space, but for a two-seat roadster, there is plenty of space for a driver and passenger while still presenting the wrap-around cockpit feel. Best of all, the sport seats keep you place during spirited driving, but the padding and posture provides plenty of comfort for a long drive across the state – so this interior is great for a cruise through the countryside or the daily grind in traffic. 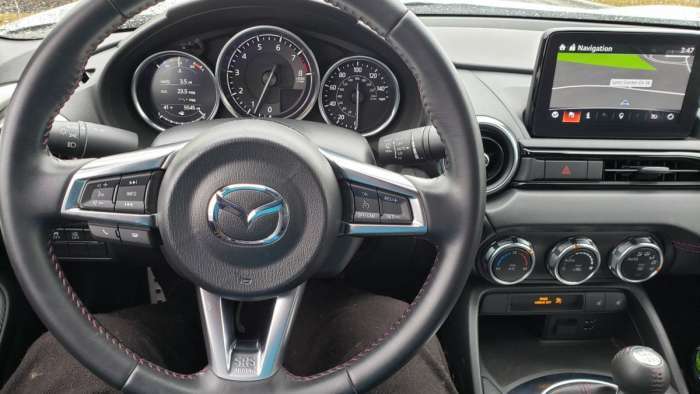 The Final Word
If you are looking for a daily driver that delivers a pure sports car experience for around $30,000, it is hard to beat the 2019 Mazda MX-5 Miata. If your key concern on the road is having tons of low end acceleration that yields stunning quarter mile times, the Miata might not be your ideal car, but as someone who owns and daily drives a Hellcat Challenger, I found the MX-5 to be a ton of fun on the curvy local roads. Add in the convertible aspect and the newest Miata makes for an awesome warm weather cruiser that will handle the twisties as well as anything in a similar price class with a well-appointed cabin and – although it won’t beat the muscle cars in the drag race – the MX-5 offers impressive acceleration for a car that was built to tear up a road course. 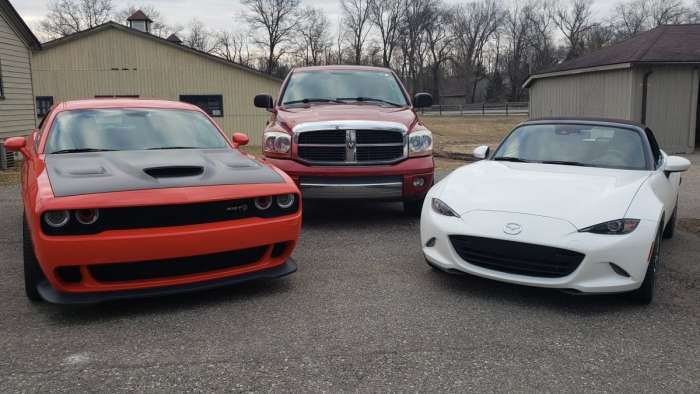 In the long run, while I don’t have any plans to trade my Hellcat on a Miata, anyone shopping for a new car with a budget of $30,000 will get more fun from the MX-5 than from anything else in that price range. It handles like a dream, it is comfortable during daily driving and it provides a connection to the road that is hard to find in today’s market, leaving little question as to why so many people have bought a Mazda Miata in the past 30 years.

Tesla Giga Berlin's New Hurdle: It's Not Only the Gov't, but Now Tesla Itself
Teslas Are Sold Out Until 2023, But The Timing May Reverse
END_OF_DOCUMENT_TOKEN_TO_BE_REPLACED