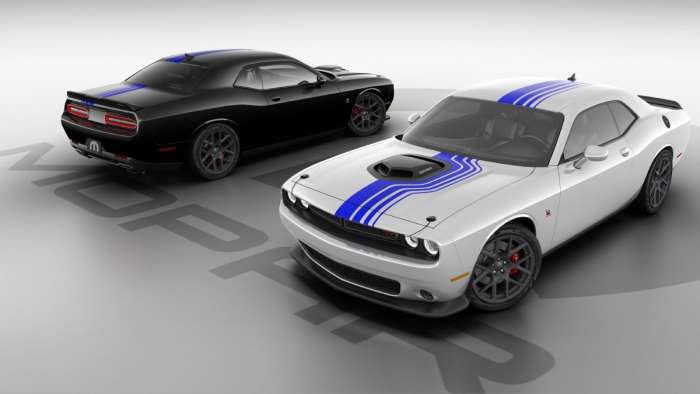 The Mopar 19 Dodge Challenger is the 10th vehicle in the history of the uniquely-branded, limited edition machines, packing 485 Hemi horsepower.
Advertisement

The 2020 model year is right around the corner, but the team at Mopar has just rolled out their factory-modified version of the 2019 Dodge Challenger R/T Scat Pack. The Mopar 19 Challenger is the 10th in the line of “Moparized” vehicles from Dodge, Chrysler and Ram, featuring many of the same basic upgrades as past models and like the previous nine Mopar-branded machines, this one is limited to just 100 units.

Of those 100 examples of the Mopar 19 Challenger, 90 will be sold to buyers in the United States while the other 10 will be sold in Canada. The American MSRP for the complete package starts at $45,835 and the first units are expected to reach dealers later this year.

Mopar 19 Dodge Challenger Exterior
Since the Mopar 10 Dodge Challenger introduced this program back in 2010, the key focus of this package has been a unique appearance and that doesn’t change for the Mopar 19. The package is available in Pitch Black or White Knuckle and the unique features begin with the “Shakedown” stripe package that runs across the top of the car, carefully curving around the Shaker hood scoop which is also part of the package. Mopar also adds functional black hood pins, 20x9-inch forged aluminum wheels with Mopar-branded center caps and valve stem caps and Mopar 19 badging on the rear spoiler. 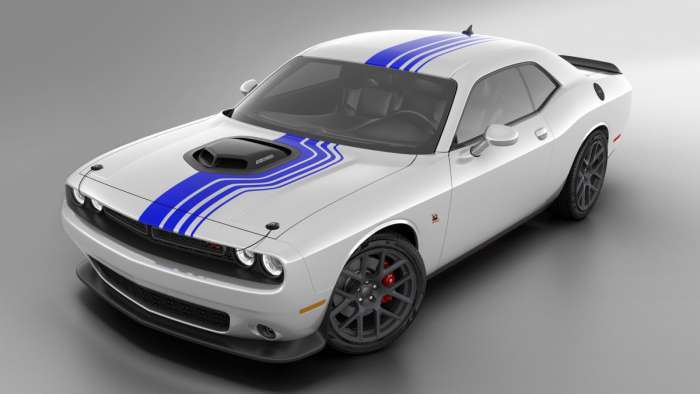 Mopar 19 Interior and Performance Upgrades
Next, the Mopar team went inside of the 2019 Dodge Challenger R/T Scat Pack, adding performance cloth seats with a two-tone Mopar logo embroidered on the seatback, bright polished door sill guards, a Mopar 19 logo on the passenger’s side HVAC dash vent and premium floormats.

Finally, the Mopar 19 Dodge Challenger comes standard with the 392-cubic inch Hemi, offering 485 horsepower and 475 lb-ft of torque. The 6-speed manual transmission is standard, but buyers can opt for the 8-speed automatic gearbox as well. The Mopar 19 package adds a cold air intake kit that works with the Shaker hood to help feed more cool air into the naturally aspirated Hemi while a set of silver-painted strut tower braces help to improve handling performance while also sprucing up the engine bay.

Mopar 19 Challenger Owner’s Kit
Since the Mopar 19 is a unique, limited edition package, it comes with a cool Owner’s Kit that includes a “birth certificate” with the build date and serial number of each car, a full-color Mopar 19 information book, a Mopar 19 rendering drawn by the design team and a “unique keepsake with engraved vehicle number”.

Mopar Vehicle History
As mentioned above, the Mopar 19 Dodge Challenger celebrates 10 years of the Mopar-branded machines, which started with the Mopar 10 Challenger back in 2010 (below). 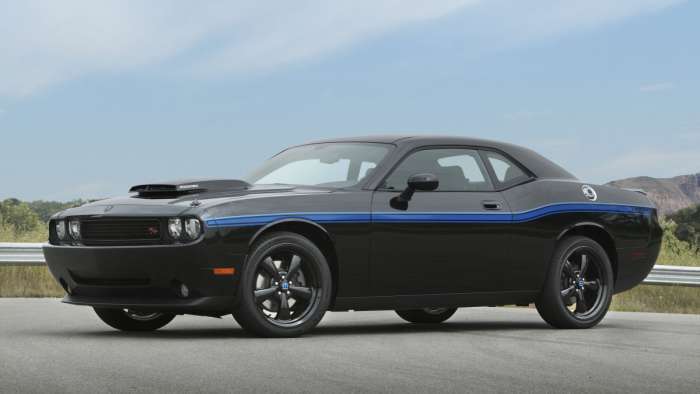