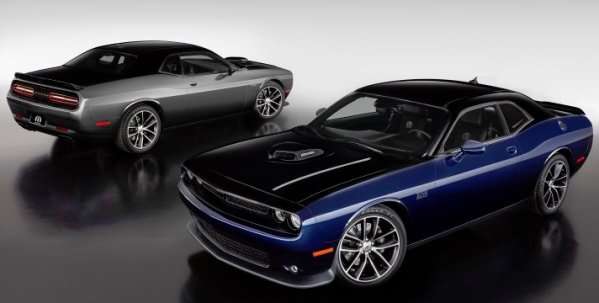 FCA’s Mopar brand has offered a special, limited edition vehicle in each of the past seven years and I have liked them all, but the Mopar 17 Challenger is easily my favorite – for 3 very simple reasons.
Advertisement

Really, the Mopar 17 Challenger is similar to the rest of the Mopar vehicles in its basic design, but three key features work together to make this the coolest in my opinion – largely because it is also the most powerful.

The Mopar 17 Features
The features of the Mopar 17 Challenger are simple, but they go a long way in making this Challenger different from the non-Moparized Dodge muscle cars. On the outside, the Mopar 17 sports a new two-tone paint job in either Contusion Blue/Black or Billet Silver/Black, with the 20 inch Scat Pack wheels, a Mopar badge on the rear spoiler, the Hellcat Challenger exhaust tips and big 392 fender decals. On the inside, the Mopar 17 has suede/leather seats with the Mopar logo embroidered on the seatback and a serialized dash plaque.

In terms of performance, the Mopar 17 has a cold air intake kit which works in conjunction with the Shaker hood system and the Air Catcher headlight system from the Hellcat Challenger. There is also a set of Mopar strut tower braces, improving handling of the big muscle car.

Finally, buyers get an owner’s package with build date information, an autographed drawing of the car and some Mopar 17 trinkets.(More on Page 2)

3 Reasons Why the Mopar 17 is my Favorite
Like the Moparized vehicles from 2010 through 2016, the Mopar 17 Challenger has a few simple performance upgrades, a few simple interior upgrades and a unique exterior appearance which you cannot get on a “normal” Dodge Challenger. However, 3 special features which haven’t been found on any other Mopar-branded vehicle make this the most unique and the most powerful in the 8-year history of the program.

First up, we have the new two-tone paint scheme of the Mopar 17 Challenger. All of the previous Mopar vehicles have been solid black or solid white, with stripes in blue, white, red or grey. The Mopar 17 design is unlike any of those previous packages, as it is offered with a two-tone paint scheme featuring Contusion Blue or Billet Silver with a gloss black hood, roof and trunk. I love the look of the Contusion Blue and Black layout.

Next, the Mopar 17 Challenger is based on the 392 Hemi Scat Pack Shaker, so it includes the Shaker hood system, with an engine-mounted air intake system poking up through a hole in the hood. I think that this is the coolest factory hood design offered in the US market, but this isn’t the first Mopar Challenger Shaker. The Mopar 14 Challenger was also a Shaker car, but that car was powered by the 5.7L Hemi…bringing me to my third point.

The Mopar 17 Challenger is powered by the 392 cubic inch Hemi, packing 485 horsepower and 475lb-ft of torque. Every previous Hemi-powered Mopar vehicle (Challenger, Charger, 300, Ram Rebel) has been powered by the 5.7L Hemi, so the Mopar 17 is the first to feature the larger, more powerful SRT Hemi.

The Mopar 17 design process was similar to the previous Mopar models, but with a unique exterior layout and the Shaker hood sitting on the 392 Hemi, this is the most powerful Moparized vehicle and – in my opinion – the coolest.