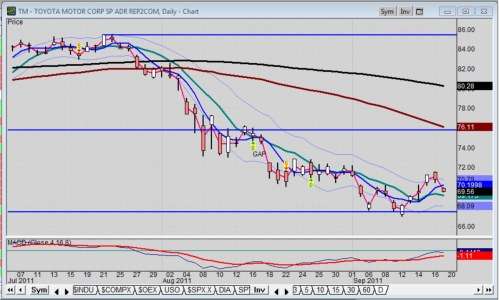 It’s amazing how much change an earthquake and tsunami can bring to the parts portfolio management within the auto industry, especially for a world giant like Toyota Motor Corp. (NYSE: TM), which currently exports parts for hybrid cars to its factories outside Japan, including America, but talk is easier than action, and world economics have a powerful influence.
Advertisement

This time, though, making parts abroad in the Japanese vernacular means manufacturing those parts in the United States for a change, as company sources now say Toyota Motor Corp. (NYSE: TM) aims to start overseas production of key parts in three to four years; and we do have Toyota plants here..

One look at the Toyota stock chart, though, and you have to wonder why Toyota would take so long, but those same sources told Kyodo News the company hopes to finalize details of the plan in one to two years. Again, that’s a bit long, isn‘t it? I thought there was supposed to be concern over protecting the supply chain. I understand the need for patience, but not when it comes to economic self defense.

According to Kyodo News, sources from Toyota Motor Corp. (NYSE: TM) say the company’s target is the manufacturing of key components for gasoline-electric hybrid vehicles, which will likely occur at some of its overseas plants in the United States and Asia to improve its profitability hurt by the strong yen.

Fact is, there’s a lot more to the Kyodo story than just a strong Yen, in my opinion. Toyota production capability took a nosedive when the tsunami hit. It’s that simple.

Production of those key parts in the United States and Asian countries would expand and coincide with the Japanese automaker's earlier plan to make hybrid components in China. Frankly, that’s probably a good idea, since Japanese and Chinese relations aren’t always the best.

Toyota stock has performed well over the past 4-5 days, but it’s likely been the result of the general market moving upward more than anything else. And this latest supply-chain news alone is unlikely to push the stock up, simply because the plans are still so far into the future; and investors have their concerns over the here and now.

And since TM trades as an ADR in the states, there is still trading today in TM since the Japanese markets are closed for holiday. Yet, it’s still a good idea to look elsewhere today as to where TM might trade on Tuesday in Japan.

Consider that American traders who watch Australia and Korean markets like me noticed stocks there took a dive last night (Sunday in America).

Then my friends in Australia wrote me a surprising email that said part of the investor confusion there stems from the big news late last week, as the heads of the five organized financial crime families (their words, not mine) - the Federal Reserve, the Bank of England, the European Central Bank, and the Swiss National Bank - announced they would offer three-month loans in US dollars to pretty much any European bank that needed it.

Point is, stocks here will likely go for another wild ride on that one, whichever direction they are pressured. And that pressure has Europe and Greece written all over it, as my Aussie friends make a good argument that flooding Europe's banks with dollars was a clear signal to them that Europe is ready to let Greece default, and maybe as soon as this week. The only reason, they say, it didn’t happen sooner is that the European Central Bank (ECB) needed time to make sure the biggest French and German banks would not be wiped out by losses on Greek government bonds.

Nonetheless, life goes on as it did over the past few weeks, when Toyota stock tested a low set as far back as September 2010 in the 67.56 area. Question is, will that support hold the next time the general market goes south? After all, no auto stock, Toyota included, seems to have the power to go against that magnitude of general market trend should it strike again.

From a pure technical analysis perspective and if all else was normal, the mid-point of the price bars on the chart have broken above the 4-day simple moving average of the same mid-point. Yet, while the proprietary MACD system that I use to indicate trend bias on the daily chart showed a bullish indication on 8/25, Toyota stock still slid to the 67.56 support line. In my mind, it’s still a matter of trusting the system or, in Top Gun terms, don’t leave your wing man; at least not yet, but as a trader I’m always ready to engage the ejection seat.

Many other stock writers have shown concern, too, over whether the general market will react negatively to Europe and the Fed this week, and with good reason. No stock fundamentals seem to matter these days, or have sufficient influence so as to drive stocks upward against a falling general market trend.

Another test for the short-term status of all auto-sector stocks will likely occur this week, especially if my Aussie friends’ perceptions are right that all the moves in the last four trading days have been to ensure adequate liquidity in credit markets. I interpret that as saying the fundamental insolvency of Greece hasn't really changed and the markets will likely return to dealing with that reality.