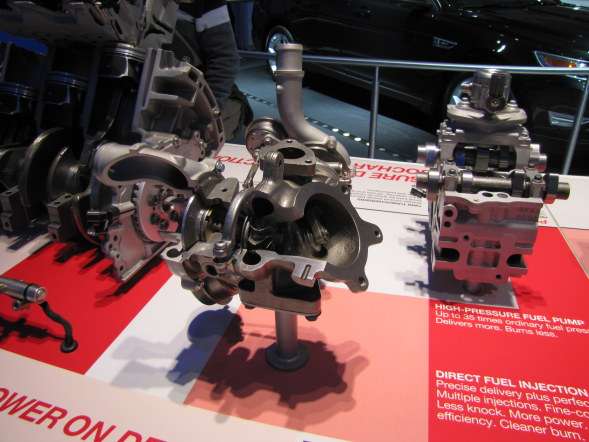 The expansion of the Ford three-cylinder 1.0 liter EcoBoost engine at 2011 Frankfurt Motor Show surely shows strength of Ford engineering, but does it help Ford meet customer needs of larger safe vehicles as well as the 2016 and 2025 MPG government expectations?
Advertisement

Taking advantage of the 2011Frankfurt Motor Show, Ford Motor Company (NYSE:F) announced it is expanding its range of vehicles that will use the more efficient 1.0 liter EcoBoost power plant, featuring a turbo charger and a much smaller engine size.

The all-new, three-cylinder 1.0-liter EcoBoost engine will become available in the Ford Focus, C-MAX and B-MAX next year. Only an engineering team working in cooperation of vehicle planners could have ever made this plan possible. So, kudos to Ford.

According to the Ford media release, Ford will introduce two versions of the engine in the Focus in early 2012 – with 100PS and 120PS and five-speed and six-speed manual transmissions respectively.

With its 1.0-liter capacity, the three-cylinder EcoBoost engine will be the smallest unit currently produced by Ford. Yet, despite its small proportions, the engine delivers power and performance to rival a traditional 1.6-liter petrol engine while emitting less than 120g/km CO2 in the Focus.

“By offering the Focus with an advanced 1.0-liter petrol engine Ford is not only making a major statement on how serious we are about engine downsizing – it also shows the strength of our development and engineering capabilities. To produce a 1.0-liter petrol engine with such impressive performance and fuel economy is a clear example of our commitment to be class-leading in fuel economy,” said Graham Hoare, executive director, Powertrain, Ford of Europe.

Ford has bought into a philosophy that downsizing engines will meet all their emission problems, and that turbo boosting will help them get back the power losses. Well, that works for now, and down to a point. Question: Is Ford approaching its downsizing limit here?

At what point will Ford realize that they simply cannot downsize and turbo boost their way to the 2025 government mandates, which expect 54.5 MPG average?

Do not take this wrong. Ford has by far the some of the best technology displays of all the automakers at the auto shows these days, at least from my perspective. However, very little is ever mentioned besides downsizing and turbo boosting; and that has to be a concern as the company goes forward and attempts to solve the next set of government mandates.

Simple fact is, every engine type has its limit; and Ford is about to run up against the proverbial brick wall here. In other words, they are approaching the point of diminishing returns with engine downsizing, as eventually it will affect reliability and product longevity.

Solution? Ford has the engineering expertise to really enhance and develop the next phase of internal combustion engine tech evolution. It is the split cycle engine, where the cooler intake and compression cycles are isolated from the hotter power and exhaust cycles.

Ford already has the expertise to deal with turbo boosting which is a natural advantage especially for a split-cycle air hybrid engine. If anyone can make this work, I believe Ford can.

I sure hope Ford opens its eyes and sees the potential, as I firmly believe Ford could step way ahead of the pack in IC engine driven vehicles. But if they don't act soon, be apprised that other auto manufacturers will.