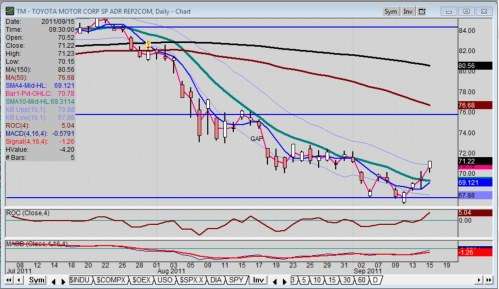 The basis for a rise in auto stocks all started at 9:00 a.m., 30 minutes before New York even opened. And since I was tracking futures already, I witnessed a small candlestick of the /ES futures representing the S&P500 grow very tall and upward in price in a matter of minutes.

So, no matter how well GM, Ford, Toyota and other OEMs present their wares and technology at auto shows, like this week’s Frankfurt Motor Show, the dynamics of the general market will often override the fundamentals of the stocks and drive their price dynamics. See the daily chart of Toyota stock, for example, and notice the bounce from support.

That phenomena alone often leads stock investors, let alone auto stock investors, to reconsider their strategy and to think more like traders. Truth is, it’s not a sin to trade. Fact is, traders and investors have far more in common than they have been led to believe,

For one, both are speculators whether they’re willing to admit it or not, because the only difference between them is the time in the trades.

Now think of the /ES or SP500 futures. It acts like a canary in a coal mine. It can smell gas that other markets are slow to react. But it takes a speculator mentality to appreciate that fact and take advantage of that information.

Legendary trader W.D. Gann once wrote that time is more important than price. This was proven once again with this morning's news stories and coincident market gyrations at 9:00 a.m. eastern. The ECB announced its latest banking operations designed to provide increased liquidity to the European banking system right at 9:00 a.m. The futures jumped sharply higher almost instantaneously and the opening in New York less than 30 minutes later was affected as well.

Of course more than just auto sector stocks were affected. The indexes and Index ETFs followed the same track as the futures. If you see one you often see the other. In that respect, it’s like a fractal; some moves are larger, some small but on a similar form of price dynamic or pattern.

Now, it really doesn’t matter what the news is. What’s most important to a speculator is how the market reacts to the news. If good news appears and the stocks just sit there and quiver, then going long is not a good decision, at least at that point. Sometimes, news has to be digested slowly over time. This morning’s ECB announcement was immediate digestion and reaction.

It also doesn’t matter if the news is directly related to the auto sector stocks. For example. sometimes the auto stocks simply ride whatever wave the general market sends it. At other times, the auto sector traders will actually think independently enough to literally ignore the news by riding its own wave of understanding.

Well, today and for the past two days, all of these stocks have reflected a similar upward pattern, albeit at their own price levels. Toyota, for example, reached a support level from the past at 67.57 and seemed to bounce up from that level.

GM stock has a similar chart pattern, despite the fact it is trading at one-third the value of Toyota stock.

More on why those stocks are trading so cheap in my next auto stock sector report.