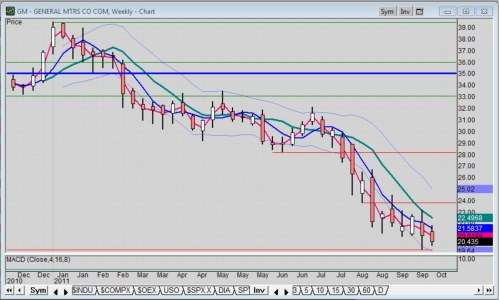 In an update, GM responded to the rating agency, Standard & Poor's of General Motors Company (NYSE: GM) credit rating in direct response to the company's new four-year-labor deal with the UAW. Question still remains, though: Will it make much of a difference to the present stock price in light of overwhelming economic conditions affecting the entire auto stock sector?
Advertisement

S&P said it was upgrading GM's corporate credit rating two notches, from “BB-” to "BB+"; and it revised GM's outlook for future ratings to stable from positive. An investment-grade rating is important, because it substantially lowers the auto maker's borrowing costs.

“We are pleased that S&P has recognized the progress we are making. Our fortress balance sheet and low breakeven point are helping us succeed even in uncertain economic times, so we can stay focused on building great products and driving profitable growth around the world.”

S&P also said it has similar plans to upgrade Ford Motor Company (NYSE: F) if it gets a similar deal with the UAW. That merely means Ford is on watch for an upgrade at this time; meaning, time will tell if it gets it.

According to S&P, Ford's rating could be raised to GM's new level if the company's U.S. labor negotiations are resolved and ratified in a way that doesn't place Ford at a significant disadvantage relative to GM's new labor contract.

For the record, both companies still carry a significant amount of debt, but GM had the advantage of clearing much of its bond debt via bankruptcy, while Ford opted not to go through that process. Both companies have under-funded pension obligations.

S&P said it believed the new GM contract "will allow for continued profitability and cash generation in North America." The credit rating agency also noted GM has a two-year track record of profits and cash-flow generation in its global automotive operations, supported by a strong performance in North America.

For the record, S&P touted similar trends as benefits toward upgrading Ford's rating.

GM stock has not fared well since its IPO in November, 2010 which opened at 33. In fact, GM stock is trading near its book price, closing yesterday at $20.76, but trading down today in early trading. Book price as reported by MarketWatch.com is $19.67 and is the only fundamentally based level of price support for GM stock.

Ford stock, which closed yesterday exactly at $10, has been hovering mear it 52-week low of $9.32 for some time with a few rallies toward $18.97, its 52-week high, but then fell back. As reported here at TN, all auto sector stocks have been wagged by general market forces and their reaction to the sovereign debt issues in Europe as well as America which have the potential to downgrade the entire world economy.