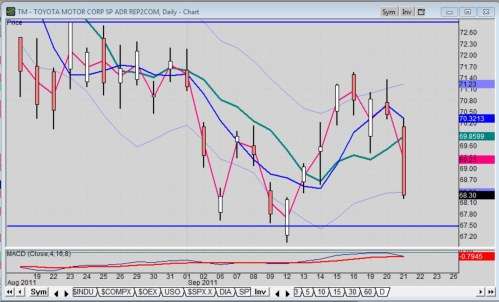 Auto sector stocks, including GM, Ford and Toyota stocks, reacted more to the Fed decision than the state of UAW contract talks today, whereby the Fed decision invoked the start of Operation Twist but the auto sector followed the general market and plunged lower.
Advertisement

Then again, auto stocks like General Motors Company (NYSE: GM), Ford Motor Company (NYSE: F) and Toyota Motors (ADR: TM) did what they’ve done for the past number of months: follow the trend direction of the general market as inflicted by news of the Fed, but this time to the tune of its new Twist announcement.

Auto sector stocks are like all the other stocks. They follow the market’s trend bias, and the market’s change in bias almost immediately. They are not market leaders. And that’s what happened late today as the Federal Open Market Committee (FOMC) spoke and the market reacted, taking auto sector stocks, like General Motors Company (NYSE: GM), Ford Motor Company (NYSE: F) and Toyota Motors (ADR: TM) to lower depths once again.

While I was busy speaking in Farmington Hills to the fine members of AAII (American Association of Individual Investors) today on my book, Awaken Your Speculator Mind” and the next cultivating phase, the brain-dominance aspect of the speculator mind, I noticed the members were concerned over the outcome of any Fed decision. By the way, special thanks to Jack Lockman for making today's seminar event possible.

Some AAI member were very concerned about the auto talks between the automakers and the UAW. One lady was surprised that I said that I did not know what was going to happen. In all honesty, I still don’t; and I would never give a baloney answer just to look and sound authoritative.

Opinions are a dime a dozen, and mine is just another dime; but I did say when pressed that Ford will likely cave to the UAW and Chrysler cannot afford the GM agreement. I have no idea if the UAW will surely strike or not, but I do know they’re mentality is foolish enough to do so.

In truth, my thoughts advanced toward focusing more on the higher-level macro events, like Greece, Europe, sovereign debt, and the Fed decision; meaning I thought they are far more important.

By the time I arrived home, around 2 p.m., news of the announcement by the Fed hadn’t broken out yet. And so the market kind of sat still until 2:30 p.m. EST when the market crowd suddenly decided to sell; and sell it did all the way into the closing bell in new York. Even the intra-day chart (not shown) of Toyota stock shows rising price bars from the first hour right up to the Fed announcement. Most other stock in the auto sector followed similar tracks, as you see withthe daily chart of Toyota stock shown.

Bottom line was, auto sector stocks were not immune. And why would they? After all, the auto stocks, like GM, Ford, Toyota and others have been following the general market’s lead for months now.

Dubbed “Operation Twist” by economists is similar to a move by the central bank in 1961, back when John F. Kennedy was president. It bypasses the money creation that fueled an outcry last year by Republicans.

For the record, not everyone on the Federal Open Market Committee agreed with the decision, but that was no different than the meeting in August when three Fed members dissented then as well. In all fairness to Fed Chairman, Ben Bernanke, too much or consistent agreement implies redundancy (his words), so he does not evade dissension. He considers it a healthy difference of opinion, no more, no less.

The real kicker , though, was best noted by MarketWatch.com who wrote, “U.S. stocks fell sharply Wednesday after the Federal Reserve again moved to lower interest rates on consumer loans and noted “significant downside risks” to the economic forecast.”

Yep, you read that right. The Fed openly admitted there are downside risks to the economic forecast; and they used the word “significant“ to express emphasis. That right there would have turned the market down no matter what decision they made today.

Face it. The markets needs surety of growth and it is not getting it. If anything, 2012 does not look so hot despite all efforts to the contrary.

Will the purchases of mortgage-backed securities help reinvigorate residential real estate sufficiently to instill stability? I sure hope so, but by the reaction of the general market, it doesn’t look too promising, at least on the surface of the announcement.

Point is, the patterns are the same. All are hovering just above some level of price support, except for GM which has no past price history but is hovering above book price.

Ford will likely test support, as will Toyota, GM and other auto sector stocks. This is time for patience and deliberate strategy sessions. If concerned, buy a put option on the S&P 500 or on your auto stocks, if you hold any. At some point, a bottom will set in, as consolidation above support says a bottom is a potential here. Question still is, will an auto sector bottom occur exactly at this level?

My reaction? I choose to let the price dynamics give me confirmation first before I buy. Maybe a little put option selling may be in order, but definitely not until I see volatility consolidate just a bit.