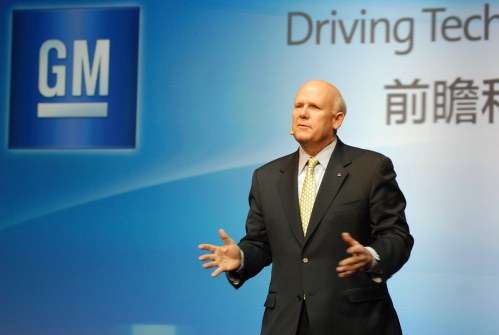 GM is driving American technology to tomorrow via China

Does it make sense that the leading automotive technology company in the world should cave in to the demands of a country? Well, General Motors (NYSE: GM) did when it agreed to revealing its electrical technology secrets to China just before GM China hosted the "Driving Technology to Tomorrow" event.
Advertisement

It all looks so cordial. General Motors Company (NYSE: GM) partially owned by the American taxpayers and China working together for the betterment of mankind’s propulsion systems for automobiles, even opening the first phase of the GM China Advanced Technical Center.

Even Dan Ackerson is playing the game like any CEO would. “Technology and innovative ideas are at our very core,” said GM Chairman and CEO Dan Akerson. “No other company has had the years of experience bringing the latest vehicles, technologies and manufacturing processes to China that GM has.”

Said Kevin Wale, president and managing director of the GM China Group: “Over the past year, we have made progress on electrification, connectivity and design. The opening of the GM China Advanced Technical Center is an important step forward in helping us carry out our work in these and other critical areas of our business.”

Well, that’s above the surface. Below it, it’s another story.

GM China recently hosted the "Driving Technology to Tomorrow" event in conjunction with the opening of that first phase of the GM China Advanced Technical Center. Senior GM executives introduced the automaker’s global industry leadership in technology and the key role China plays.

What was missing, though, was the way China pressured GM into revealing its electrification secrets just in order to play ball, so to speak, in China’s market. Good move for China, if they can get away with it; and they are, once again.

It’s tough to totally blame General Motors (NYSE: GM) as it needs China’s auto market for growth and future profits. Problem is, that is coming at a price that one day GM may hang its head in shame or at least in wonder.

This writer has long believed and written that China will one day say to GM, “Thank you, but we’ll take it from here.” By that I mean China will have all that it needs to build and export automobiles to the rest of the world; and we, American industrialists that we are, gave it all to them with little in return except shakenhands, smiling faces and access to the Chinese market which will likely be curtailed as the nation matures with OUR technology.

According to Mary Barra, GM senior vice president, Global Product Development, “Everywhere we do business, we’re focused on delivering the best vehicles with the right technology and with industry-leading quality. Our team in China is an important and growing part of that effort.”

GM is exploring mass reduction and the use of advanced materials. It is working with Shanghai Jiao Tong University through the Advanced Manufacturing Processes Collaborative Research Lab. GM is also working to improve fuel efficiency by continuing to improve the internal combustion engine. It has made China a center of expertise for supercharging and turbocharging technologies.

Wait, stop the presses! Read that again. China is becoming a center of expertise for supercharging and turbocharging technologies?

That’s not all either. GM is exploring vehicle technology in other areas such as infotainment with innovations such as the OnStar telematics system, vehicle navigation systems, “connected” radios and improved Bluetooth wireless capability. Barra announced that GM will introduce its next-generation infotainment system in China with a system for each vehicle brand starting in the next couple of years.

Further down the road, GM has a vision of one day connecting all vehicles through the mobility Internet. Vehicles will be able to collect, process and share enormous amounts of data, enabling autonomous driving. The EN-V concept showcased by GM in China at World Expo 2010 Shanghai represents GM’s leadership in this area.

GM’s predominant answer to the fuel-efficiency question – and the current focus of its technology development in China – is electrification. According to Ray Bierzynski, GM China executive director of electrification strategy, China is particularly well suited for vehicle electrification.

GM offers a comprehensive range of new energy vehicles, including the Buick LaCrosse eAssist and Chevrolet Volt extended-range electric vehicle, both of which have been or will be introduced in China this year. It is also sharing its advances with China by introducing new forms of electrification, developing and building battery electric vehicles.

Proof of that occurred on on Monday, as GM and its strategic partner SAIC, signed an agreement to co-develop a new electric vehicle architecture for China.

In addition, GM is participating in the Tianjin Eco-City with a next generation of its EN-V concept. Bierzynski confirmed that GM will step up its participation in the Shanghai Jiading Electric Vehicle Demonstration Zone by showcasing its Volt technology solutions while carrying out Volt demonstration programs on its own in several major Chinese cities.

The opening of a battery lab at the GM China Advanced Technical Center will bolster GM research in innovative battery development with the goal of creating batteries that have longer range and are less expensive.

Whatever GM is leading, remember it's important to realize that China will be leading in those areas as well. Good for now, but watch out in the near future.

Fact is, GM is giving, (oh, I’m sorry, sharing its technology) with China. So, remember this article as well in the years ahead. In the Star Wars vernacular, every Sith Lord (in this case, China) replaces his apprentice (read partners) with new ones; and it will one day happen to GM.

-----------------------
About the Reporter: After 39 years in the auto industry as a design engineer, Frank Sherosky now trades stocks, futures and writes articles, books and ebooks like, "Perfecting Corporate Character," "Awaken Your Speculator Mind", and "Millennial World Order" via authorfrank.com. He may be contacted here by email: Fran[email protected] or via his Twitter i.d. @Authorfranks

For Some Former Daimler Managers Daimler Is Authority, While Tesla Is Like a Startup
How Daimler Unintentionally Subsidizes Tesla Giga Berlin
END_OF_DOCUMENT_TOKEN_TO_BE_REPLACED