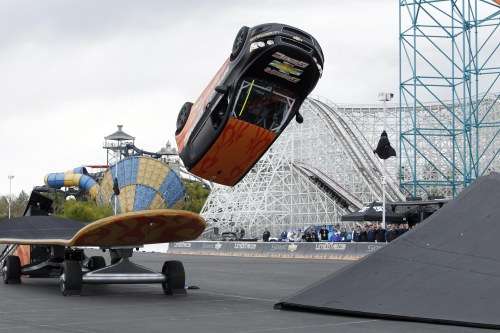 Rob Dyrdek, host of MTV’s Fantasy Factory and Ridiculousness, performed the stunt before spectators at Six Flags Magic Mountain, while MTV filmed the feat for the Season 5 premiere of Fantasy Factory. Dyrdek executed the kick flip in Santa Clarita, California, over the world’s-largest skateboard that he created for a previous stunt.

Dyrdek performed this live-action stunt in front of spectators as the MTV cameras were rolling. (Chevrolet News Photo). Of course, special preparations for the Chevy Sonic were made for the stunt, like racing seats/seatbelts and a roll cage -- which, by the way, already has the most standard safety equipment in the sub-compact class, including 10 air bags. The Sonic, starting under $15,000, is the only sub-compact built in the U.S.

According to the GM news release, Rob Dyrdek is beyond characterization; in other words, he is not a personality who can be simplified into a sound bite. He has already leveraged his creativity, business savvy, and professional skateboard career in order to launch a long list of charities, innovative businesses, and noteworthy productions in film and television.

So, a kick flip – a 360-degree rotation in mid-air – is a common stunt on a skateboard, but not so much in a vehicle. Then again, this is Dyrdek; and according to him, both he and the Chevy Sonic were up for trying ‘firsts.’

“A kick flip with a Chevy Sonic was a no-brainer,” said Dyrdek. “I am a Chevy guy from my ’69 Camaro to the Tahoe I drive every day. The Sonic’s power and sportiness made it the perfect vehicle for this awesome stunt.

“With his outrageous personality and his willingness to try any adventure once, Rob Dyrdek was the perfect match for the Sonic and our ‘Let’s Do This’ campaign,” said Kevin Mayer, director of Chevrolet advertising and sales promotion.

The Sonic brought safety chops to the stunt with a Top Safety Pick designation from the Insurance Institute for Highway Safety, 10 standard air bags and high-strength steel as part of its body structure.

“I was confident that it would keep Rob safe even during a high-speed action stunt,” said Mayer.

While GM had a video on its site, this TN reporter found one on YouTube taken by a spectator:

For the record, Rob has dedicated his time to create the first ever professional street skateboarding league, Street League Skateboarding™ that is approaching its third touring year in 2012.