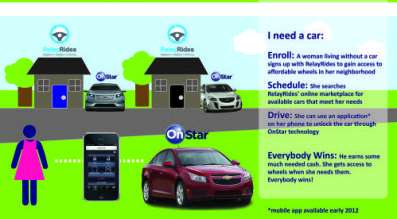 General Motors Company (NYSE:GM) is teaming up with RelayRides, the world's peer-to-peer carsharing marketplace; and OnStar with mobile apps are once again playing a key part.
Advertisement

According to the GM news release, the exclusive relationship will allow millions of GM vehicle owners to leverage the OnStar system to rent out their idle cars through the RelayRides marketplace via the simple use of mobile apps.

The program, which will launch in early 2012, is GM’s first large-scale involvement in carsharing and is aimed at making it easier for those without a vehicle to access temporary, affordable and reliable transportation in a Chevrolet, Buick, GMC or Cadillac.

RelayRides enables car owners to make money while providing those in need of a car with affordable access to one. The company backs its service with a $1 million insurance policy and features proprietary, best-in-class technology for a convenient, secure and smooth exchange.

For the record, RelayRides is a venture-funded company backed by Google Ventures, August Capital and Shasta Ventures. It especially received a lot of attention from major web media enterprises such as Car Connection. Read: http://www.thecarconnection.com/news/1066935_gm-to-let-onstar-owners-rent-out-their-cars-using-relayrides

“We’re using technology to make both our older and newest models carshare ready and available for those owners who choose to participate in carsharing,” said Stephen Girsky, GM vice chairman. “Our goal is to find ways to broaden our customer reach, reduce traffic congestion in America’s largest cities and address urban mobility concerns.”

The program initially will promote the relationship through various events and demonstrations in California to showcase GM’s OnStar and RelayRides technology, and will feature Chevrolet vehicles, including the Volt extended-range electric vehicle. Participation in the RelayRides carsharing program is voluntary.

“RelayRides has always worked toward providing the safest, most advanced, peer-to-peer carsharing marketplace, where neighbors can help out one another by making their frequently unused car available to those who live nearby,” said RelayRides Chief Executive Officer André Haddad. “With the new GM relationship, RelayRides can leverage the OnStar technology to make carsharing even more convenient, with nothing more than a mobile app. Carsharing has never been easier.”

Founded in June 2010, RelayRides is currently available in San Francisco and Boston, and plans to strategically expand to U.S. areas that demonstrate high consumer demand.
RelayRides is pioneering the ability to reach various population densities in a more spontaneous and hassle-free manner.

RelayRides will leverage OnStar technology through a mobile application to allow customers to check for available vehicles, make a online reservation online as well as check future reservations, locate their reserved vehicle via GPS and lock and unlock the vehicle, all through their smart phone.

“Our experience in mobile app development will be a benefit to RelayRides as they develop their customer app,” said Nick Pudar, vice president of Planning and Business Development, OnStar. “Using OnStar’s technology will help make the carsharing rental process easy and safe for customers, and avoid the hassle of installation of additional equipment on their vehicles.”

This RelayRides mobile application is planned for early 2012.

From an Investment Perspective

General Motors Ventures LLC is in advanced discussions with RelayRides about an investment in the company as part of GM’s overall commitment to addressing urban mobility issues. Question is, how much does the venture arm of GM contribute to the bottom line of GM stock? That is neither fully clear or touted. Still, any venture that creates a new opportubnity for income surely has to be welcomed news by GM stock investors.