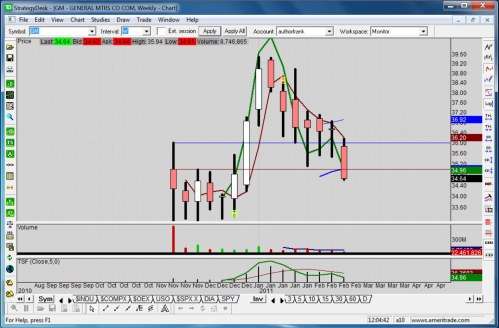 GM stock drops below 35, the opening price of its IPO

General Motors stock is now trading below its IPO opening trading price of 35 dollars, most likely in response to a rise in oil prices from the Libyan unrest.
Advertisement

There is nothing like a weekly chart to give the broader view of price dynamics.

Fact is, General Motors (NYSE:GM, TSX: GMM), Ford (NYSE: F) and Toyota (TM), along with the rest of the auto industry, are selling at lower levels due to the rise in oil.

In the case of GM stock, the weekly chart still shows GM stock trading above the official IPO price of 33, but below the IPO day open of 35.

Technically speaking, this is significant. The next level of support is indeed the 33 level of which was tested right after IPO day at 33.06.

For the record, General Motors stock, even after it reported 178,896 total sales in January, a 23-percent increase from a year ago for the company’s four brands, remained stoic for the past few weeks without any major bump to the upside.

Regarding stock price dynamics, it’s not unusual for traders to buy on rumor and sell on the news, as it appeared to do. That report, however, produced no grand price moves. That has now changed as auto analysts and traders digest world conditions.

Phil LeBeau of CNBC, however, reported that the auto industry is in far better shape this time around. Fact is, all the companies are selling hybrids and small cars, unlike the last time we had spike in oil prices.

The weekly chart shown shows price support between at 33.00 and resistance at 39.48. While GM stock appears under pressure by all the news of Egypt and Libya, rises in commodity prices, especially oil and gasoline, can have an immediate effect on sales.

It will likely take general market momentum to help GM stock overcome this week’s down bar trend, and it will require higher than average volume. Bullish forward-looking statements will try to help, but that 33 level may be in jeopardy if the crisis gets any worse.

The threshold for extreme financial pain the last time around for American drivers was around $4 per gallon gasoline. Due to inflation that may now be $4.25.

And from the time I snapped this chart picture, GM stock sold lower, below 34.30.