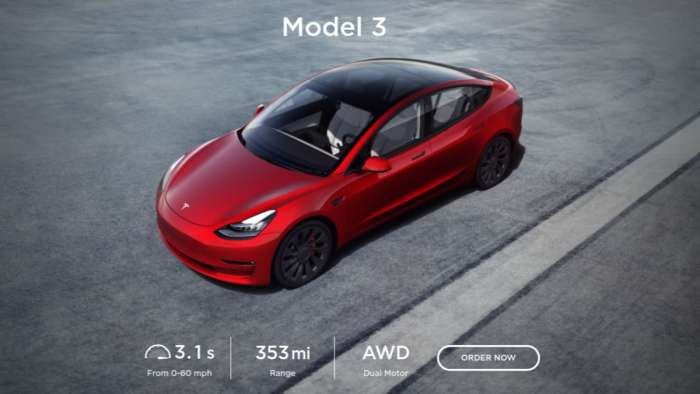 The Model 3 refresh goes live on Tesla’s updated online configurator, and it comes with several comprehensive updates. According to the new order page, Model 3 now has an increased range, improved 0 to 60 times, a new center console, a powered tailgate, chrome delete similar to the Model Y, and two new wheels.
Advertisement

These are all the changes we can see from the order page but, according to earlier leaks, the new Model 3 is also expected to have other improvements. These include the addition of a heat pump, new double-paned glass, changes to the upholstery of the interior, and a USB port inside the trunk.

And as for the range increase, the Standard Range Plus Model 3, which used to have a 250-mile range, is now listed as having 263-miles. The Dual Motor AWD performance variant sees its range increase from 299-miles to 315-miles. And finally, the Model 3 range leader, the Long Range Dual Motor AWD goes from having 322-mile EPA range to 353-mile. Confirming what we saw in the leaked pictures, the center console of the Model 3 has now been updated with a new design that more resembles the Model S and X. All the chrome areas are now black. And a powered tailgate is now standard on all Model 3 variants. Related News: Elon Musk Says We Will Make A Dense Tesla If It Matters.

The 2021 Model 3 also comes with updated wheels. The original 18-inch Aero Wheels now feature a new design, and the 19-inch Sport Wheels feature the design that was spotted recently in vehicles coming out of the Fremont Factory. And as for the Performance it now finally comes with 20-inch Uberturbine wheels. Elon Musk several times has said Tesla doesn’t do refreshes to its vehicles. But with this update, the Model 3 has seen changes to almost every part of the car. This is the most the Model 3 has changed since its initial launch back in 2017.

So what do you think? Are you excited about all the improvements to the Model 3? Are there any other improvements you wish Tesla would bring to the cars? Let me know your thoughts down in the comments below.