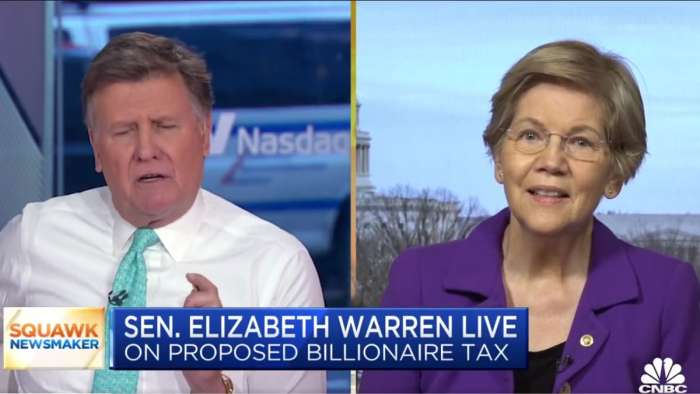 Senator Elizabeth Warren in a new CNBC Squawk Box interview has softened her criticism of Tesla CEO Elon Musk. In the interview, Warren says she celebrates Elon Musk's success and that she is asking the richest individuals to pay their fair share of taxes so that the next Elon Musk has a chance.
Advertisement

When he was 17, Tesla CEO Elon Musk immigrated to Canada from his home country South Africa. At the time, Musk made the move without much to his name and enrolled at Queen's University through a scholarship.

Following this, Musk transferred to the University of Pennsylvania where he had to do a number of side jobs to pay for his own tuition. Musk then made his way to Silicon Valley, where he had to resort to showering at the YMCA and sleeping in his office as he was building his first internet startup, Zip2.

Related news: Tesla Spends Three Times R&D Average On Each Car Sold, With No Advertising At All

However, as Musk successfully tackles his financial woes, he’s now met with a whole new challenge. Musk has been at the receiving end of a barrage of criticism claiming despite his enormous wealth he does not pay his fair share of taxes.

And the most pointed of these attacks come in the way of democratic senator Elizabeth Warren. Warren on multiple occasions has called on Musk to stop “freeloading” on the American taxpayer and pay his fair share of taxes.

Let’s change the rigged tax code so The Person of the Year will actually pay taxes and stop freeloading off everyone else. https://t.co/jqQxL9Run6

Warren has also proposed a wealth tax that could cost Musk as much as $50 billion. In response, Musk said that Warren reminded him of a "friend's angry Mom" who would "just randomly yell at everyone for no reason." Musk also went on to call Warren "Senator Karen."

Please don’t call the manager on me, Senator Karen

After their heated exchange, Musk announced he would be paying more taxes in 2021 than any American in history. Musk’s tax bill for 2021 is estimated to be somewhere between 11 and 12 billion.

Despite the enormity of Musk’s tax bill, Elizabeth Warren was barely impressed. And in response to a CNN article about the issue, Warren responded by saying “I’ve got a plan to make sure it isn’t breaking news when a billionaire actually pays any taxes.”

I’ve got a plan to make sure it isn’t breaking news when a billionaire actually pays any taxes.

Hardworking teachers, waitresses, & plumbers pitch in without making headlines. We need to fix our rigged tax code because this issue is bigger than one thin-skinned billionaire. https://t.co/2LaMVpK7fW

Following this instant, Warren and Musk’s feud had been raging on. That is until today when Elizabeth Warren came on CNBC’s Squawk Box to discuss her billionaire tax.

In the interview, Warren was asked by host Joe Kernen if she believes her view of billionaires is shared by most Americans. Kernen specifically mentioned Elon Musk and said “take someone like Elon Musk and what he has created - tens of thousands of jobs, billions of dollars of shareholder wealth, (and yes for himself as well). And in the process changed the world really, and in our country, he’s one of us, he’s proud to be American.”

Kernen continued “He recently said he will pay $11 billion in taxes yet, you have said he needs to stop freeloading off the rest of us. Does that really ring true to you senator? Should he not be celebrated and not disparaged?”

I’m happy to celebrate success, but let’s remember, Elon Musk did not make it on his own. He got huge investments from those public school teachers and minimum wage workers who have been paying their taxes all along to get that business up and running through rough times. The thing is, as Americans we are glad to make those investments, we are glad to all have a hand in helping create all of those jobs. All we are saying is, when you make it to the top, to the tippy top, then pay something so that everybody else gets a share.

Elon Musk paying this year, that’s great because he chose to sell some stock. 2018, also one of the richest person in the world, how much did he pay? We actually saw his taxes that year and the answer is he paid zero.

Kernen responded saying “Senator do you think If he [Elon Musk] had never been born, do you think that the $11 billion (taxes in 2021) is a zero-sum game? Someone else would have paid it? Because he created that company (Tesla) here & it’s this successful, why not celebrate the $11 billion he’s paying?

Senator Warren responded by saying, she celebrates success but that she is only asking the rich to pay their fair share so that “the next Elon Musk gets a chance.”

Despite all the criticism, this is still the most positive the Massachuties senator has sounded when it comes to the Tesla CEO. As of now, it is hard to say if this interview will be the start of warming relations between the two individuals. However, we will be sure to keep you posted as the Warren V. Musk saga continues to unfold. Make sure to visit our site torquenews.com/Tesla regularly for the latest updates.

So what do you think? Do you agree with Senator Warren’s criticism of Musk not paying anything in federal taxes in 2018? Or do you fall on the other side and believe Musk should be celebrated for paying the highest taxes of any American in history? Let me know your thoughts in the comments below.

tangible wrote on March 30, 2022 - 6:19pm Permalink
Elizabeth Warren could pay HER fair share by returning the grants she received for being 1/64 Native American. Put kindly.

Tesla Contemplates A New Strategy for China Retail even As Sales Boom
Jay Leno on Elon Musk & EVs: “I Think He Should Get ... Credit"
END_OF_DOCUMENT_TOKEN_TO_BE_REPLACED