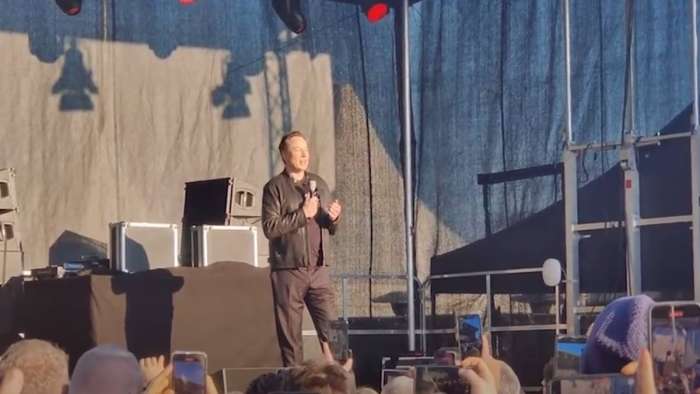 Tesla is going to grow at 70 to 80 percent per year, according to Elon Musk and a private meeting with Tesla enthusiasts at Giga Berlin. And the bigger news is that Elon Musk thinks Tesla will grow even more than that in some years.
Advertisement

Elon Musk was shown in a recent video with the opening of Giga Berlin as he was letting the audience answer questions and Elon Musk was answering them. This is very rare for a CEO of a trillion dollar company to do. It's the behavior of something who has nothing to hide. This information was better than an earnings call.

People who follow the EV industry asked questions. It would be cool to ask about Tesla producing their own LFP batteries, but nobody asked about it. Something Elon Musk said was very profound: the rough calculation was that it was about 300 terawatt hours is needed to create a sustainable economy.

Elon said Tesla is doing a good job and growing from 70 to 80 percent a year and that sometimes Tesla will grow faster than that in the future. This number is astounding, but not even accurate about the trajectory of Tesla.

Tesla has grown 70-80% annual growth even through a pandemic and chip shortage. That's phenomenal. And Elon said maybe even faster than that in the future. Wow. When companies talk about growth, they talk about earnings growth because this is the most important thing for the price tag of the stock.

Elon was talking about vehicle production when he talked about the percentage growth. Elon just said we expect 70-80% growth to continue and maybe even faster in the future. All forecasts for Tesla trying to predict its future are at around 50% and not aligned with this much faster growth.

Tesla has two more new factories about to reach volume production. Giga Texas is enormous and Giga Berlin is pretty big. The manufacturing processes are going to be really advanced and everything else. Tesla likely saw this additional growth before Wall Street and anyone else.

I think this information is going over the Media and Wall Street's head. Only true Tesla fans were at the Giga Berlin meeting - only Tesla believers who he could speak the truth to and not sandbag. Let's take a look at the numbers.

The bottleneck is the engineers required and getting enough batteries. Elon Musk's Texas Institute of Technology and Science might be the way Tesla gets the engineers.

Tesla would also need to produce more efficient models to reach these large vehicle numbers - a smaller Model 3 perhaps? I'm not sure the Cybertruck will be released next year with this rate of growth...