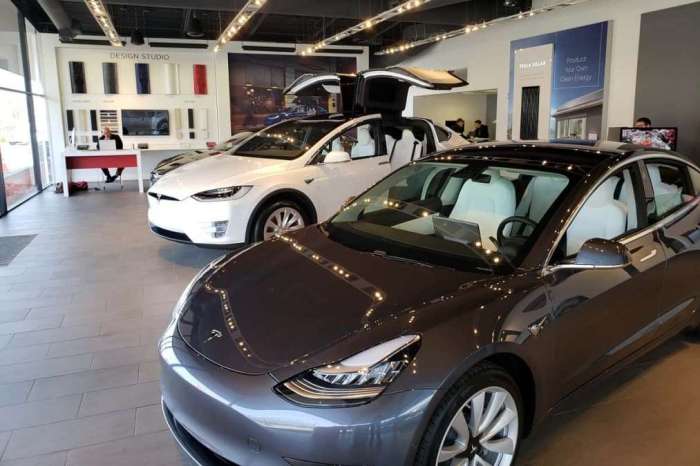 What if Tesla could increase its revenue for every car built by a meaningful amount? This wouldn’t require any added production capacity, or special factory tools or workers. The infrastructure would remain the same, but with each car that rolled off the floor, Tesla could add $12,000 in revenue. That opportunity now exists for Tesla. All the company has to do is provide more of its eager customers to accept a technology it feels is a game-changer. 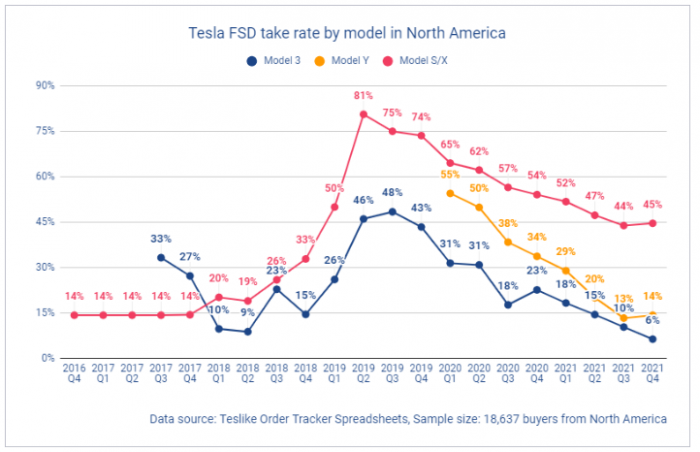 At one point, more than half of U.S. customers who purchased a Tesla opted to add Full Self Driving (FSD). Now, about one in seven do. Globally, it’s half that rate at roughly 7% opt-in for FSD. This incredibly low take rate is a huge opportunity for Tesla. Not only would the company add meaningful revenue, but it would also put more drivers behind the wheel of a technology the company believes in.

Troy Teslike is an independent Tesla researcher and a Tesla addict who tracks Tesla data that the company itself guards like the Coca-Cola formula. Troy tracks U.S. delivery volumes, average selling prices by model, he knows how many Tesla owners are opting for FSD today, and how many did so since the driving assist technology came to market. Or came to beta, or whatever imaginary marketing lingo Tesla prefers.

A little over two years ago, about 53% of all Tesla buyers drove home in a vehicle with FSD. As of the end of Q4, that number had dropped to just 14%. FSD opt-in has dropped continuously over the past nine quarters. The longer FSD is in the market, the fewer Tesla owners want it. Or want to pay for it. Pricing matters with FSD.

Now standing at $12,000, and who knows when the next price change will come, FSD is one of the most expensive vehicle options ever offered by not just Tesla, but any brand. Looking at the detailed breakdown of which Tesla Model buyers opt-in for FSD shows us that price matters. The very expensive Models S and X have a much higher take rate. It peaked at 81% and is now down to about 45%. From an added revenue standpoint, these models matter very little. Tesla barely sells any Model S and Model X vehicles in America anymore.

The Model Y and Model 3 sell robustly. And the higher price Model Y (Which starts at over $64K without FSD) has a 14% take rate. Buyers of the least expensive Tesla vehicle, the Model 3, which starts at about $48K before FSD almost always opt not to take it. Just 6% of Model 3 buyers were taking FSD according to Troy’s data.

If Tesla could convince more Model Y and Model 3 buyers to opt-in for FSD, the equivalent revenue could be as much as adding a new model would be. But with none of the cost-side burden.

If you've read this far and are dying to add a comment below saying I’m a big dummy and that Tesla began offering a subscription option for FSD in July of 2021, feel free. Tesla offers a subscription for either $99 or $199 depending on which version of a vehicle you have. Glance at the FSD take rate chart though and you will notice that the low take rate at time of purchase was established well before this program. Troy Teslike is hoping to capture some subscription data going forward, but it is a difficult task. Tesla might tell us how many subscriptions it garners in a quarterly report at some future point, but we won’t hold our breath. Tesla doesn’t even break out its delivery by individual models.

For more background on the pricing evolution of FSD and how it impacted take rate, please check out Troy Teslike's Patreon page. We hope you will opt to support Troy, but this page is presently free to view. You can also follow Troy onTwitter @TroyTeslike.

What do you think of FSD? Would you opt to purchase it if you were shopping for a new Tesla? If you're a Tesla shareholder would you like to see more revenue, presumably higher profits, and a possibly higher stock value from more FSD purchases? Tell us what you think in the comments below.

Donte wrote on March 29, 2022 - 10:04am Permalink
I paid 5k for FSD when I ordered model Y. I would absolutely not pay for it if I had to purchase today. I can’t imagine what FSD would need to be able to do to be worth 12k but it’s nowhere close.
Joe wrote on August 24, 2022 - 8:06am Permalink
It is ridiculous. $12-15K for something that works no better than what other manufacturers are now including on their vehicles. Tesla should make this a $1000.00 option and net the returns on 90% of their vehicles instead of 10%.