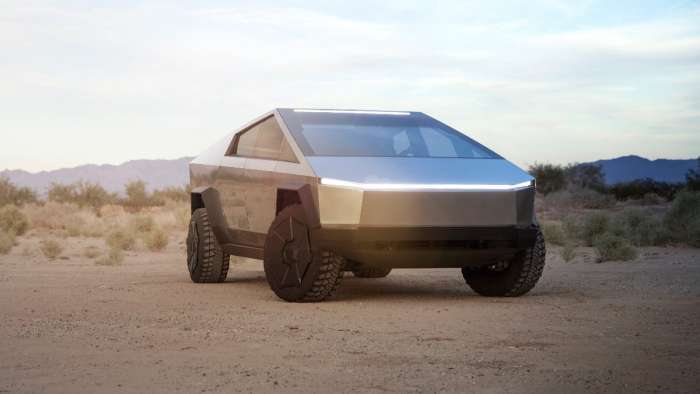 Tesla is currently in the process of getting ready to launch the Cybertruck. And today, we got a glimpse into that process as a new Cybertruck prototype was spotted which appeared to have been off-road testing. This Cybertruck prototype had a broken windshield, several scratches all over the body, bolted-on Lidar sensors, and a new unconventional wheel design.
Advertisement

Tesla unveiled the Cybertruck back in November 2019. Since then the vehicle has amassed over 1 million reservations with some estimates pushing the reservation number as high as 3 million.

Demand for Tesla’s futuristic truck is through the rough. However, Tesla has delayed Cybertruck production to mid-2023. Supplier leaks have even pushed out the start of production to the end of 2023 with first deliveries not coming until early 2024.

Elon Musk has also recently revealed the Cybertruck is sold out until 2027. This has been disappointing for those of us who can’t wait to see the futuristic truck out on the roads.

However, in the past couple of months, there has also been some good news regarding Cybertruck’s production. Musk has confirmed a new 9000-ton Giga Press which finished assembly and is expected to be delivered to Giga Texas any day now will be used to build the Cybertruck’s body.

And last month, as we wait to see whether this news means Tesla might start Cybertruck production earlier than expected, we have gotten a new render of a different design of Cybertruck.

However, among those details, we also saw a new Cybertruck render. This Cybertruck has some notable changes including 6 wheels with 4 wheels on the back, a much wider rear body, additional lighting on the top, and a new rack design to supplement the vault.

And before we were done digesting the new information, we also got our first look at the refreshed interior of the Cybertruck. The Cybertruck interior pictures were first shared by KSBW Action News 8.

In the new interior, the most notable change is the white, rectangular, marble-looking dashboard of the Cybertruck prototype is now replaced with a more traditional triangular shape and black material resembling the dashboard of Tesla's current vehicle lineup.

The gauge cluster can be seen on the left. Very interesting small window around the A pillar. pic.twitter.com/Ls6lOOSyEj

Other changes include, the Cybertruck now has a screen behind the steering wheel resembling the interior of the Model S & X, the seats are also less angular and now look more production ready and in line with Tesla’s other vehicles, other minor changes we can see are a small rectangle piece over the A-pillar which is likely to be an attachment for screens that will serve as side view mirrors.

Other confirmed changes we have about the refreshed Cybertruck include rear-wheel steering, handless doors, an opening from the bed to the rear seats, and many smaller changes.

Musk has also confirmed there will be a new quad motor Cybertruck variant. Even though Elon hasn’t shared details of the new truck, insider leaks have suggested it will have 0 to 60 mph time of under 2 seconds.

can I borrow that pic.twitter.com/bZXuSktPN1

As you can see from the picture above, the windshield of this Cybertruck prototype has several deep scratches, not only that, the vehicle also has scratches on the front bumper and is overall dirty, and appears to have been off-road testing.

Given Tesla’s move towards using only cameras for self-driving purposes and the recent release and improvements coming with FSD Beta 10.69, it’s very unlikely that these sensors will make it to the production version of the vehicle.

Third, this prototype also sports a new wheel design. These new wheels have several protrusions and openings and do not appear to be aerodynamic or in line with Tesla’s overall clean design. Several people online have expressed their disapproval of the new wheels and hope that Tesla changes the wheel design when it comes time to finally deliver the vehicle.

Seeing a Cybertruck prototype out in the wild doing real-world testing is really exciting. It points to the fact that Tesla is getting closer to launching the vehicle. As of now, beyond speculation, we don’t have concrete information regarding the type of test this Cybertruck prototype has undergone.

However, we will be sure to keep you posted once we get more information about the situation. Until then, make sure to visit our site torquenews.com/Tesla regularly for the latest updates.

So what do you think? Excited to see the Cybertruck out in the wild? How do you think the vehicle broke its windshield? Also, what do you make of the new wheel design and Lidar sensors? Let me know your thoughts in the comments below.

For more information check out: Tesla Continues to Have No Competition