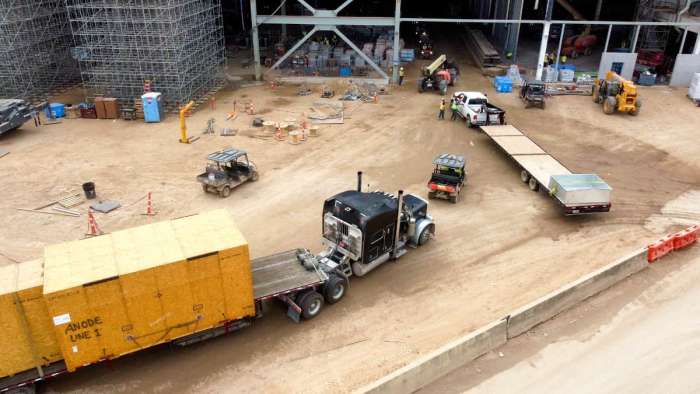 In the past 2 years, prices of lithium have gone up 11 folds. Following this, Tesla CEO Elon Musk now is saying the EV maker is considering entering the lithium mining and extraction business at scale. Musk also added Tesla has pioneered a sustainable process of lithium mining.
Advertisement

In the past few years, Tesla has been growing vehicle production at a breakneck speed. The EV maker has gone from producing and delivering under 100,000 vehicles in 2018 to over a million vehicles in the last 4 quarters.

Evs’ share of global vehicle sales has also grown at an impressive pace. In 2018, EVs accounted for only 2.2% of global vehicles sales, that number has now quadrupled to over 8%. And this incredible growth is not showing any signs of slowing down.

Related news: Elon Musk Refutes That He’s Offloading Twitter Shares After Gaining A Seat On The Board

For instance, taking Tesla as a case study. The EV maker in just the span of two months has inaugurated two new factories on 2 continents. On top of that, the EV maker is also in the process of significantly increasing production capacity at two of its current factories.

However, despite the incredible growth, the raw material supply necessary to make batteries hasn’t been able to keep up. And this has sent prices of some key battery minerals through the roof.

Lithium for example has gone from $6,800 per tonne in 2020 to over $78,000 per tonne currently. This is an 11 fold increase in just the span of 2 years and can be attributed as one of the reasons EV prices have significantly gone up recently.

And this is why Tesla CEO Musk is considering entering the mining and refining business at scale. According to Musk, the “price of lithium has gone to insane levels” and the Tesla CEO doesn’t believe there is any fundamental reason prices for the mineral should be so high.

In a Twitter response to a chart of lithium prices in the past 10 years, Musk wrote “there is no shortage of the element itself, as lithium is almost everywhere on Earth, but the pace of extraction/refinement is slow.”

And as a warning to Lithium mining companies, Musk said if they do not step up their production and extraction activities, Tesla will be forced to join the lithium mining business at scale.

Price of lithium has gone to insane levels! Tesla might actually have to get into the mining & refining directly at scale, unless costs improve.

There is no shortage of the element itself, as lithium is almost everywhere on Earth, but pace of extraction/refinement is slow.

Tesla is the most vertically integrated volume car company in the world meaning, the EV maker produces more components for its vehicles than any other automaker. And the main reason Tesla chooses to bring component production in-house is that suppliers are usually unable to keep up with the EV maker's fast-paced demands.

Since 2010, Tesla has been bringing in house production of more and more components that, at Tesla’s recent Giga Texas opening party Elon Musk said “raw materials come in one way, and a vehicle out the other”.

Still, this doesn’t seem like it’s cutting it for Tesla, and the EV maker by going into lithium mining and refining is now considering vertically integrating the last major input to its vehicles. However, Musk seems to want to give lithium miners one last chance to get their act together.

And if the miners are unable to keep up with demand, according to the company’s Battery Day presentation, Tesla has already shown its plans for a revolutionary technique of sustainable lithium mining.

To start, Tesla has bought the rights to a lithium deposit in Nevada. There, the company plans to pioneer a new way of sustainable lithium mining. In the presentation, Musk said Tesla will be using sodium chloride (table salt) and water to extract lithium from the ground. This process should significantly reduce lithium processing costs and eliminate water waste.

Related news: People Get So Many Things Wrong About Tesla

Musk believes there is enough lithium just in Nevada to convert the entire US car fleet to electric. And the company seems to already be moving on its lithium processing plans. Already Tesla has signed a deal with a company called Piedmont for the latter to supply the EV maker with raw lithium.

In the agreement, Piedmont will supply Tesla with spodumene concentrates and Tesla will take this and process it, and extract the lithium.

But, since the way lithium ends up in the battery is through the cathode, Tesla plans to build a cathode production plant in Nevada next to the lithium processing plant. This plant will combine the two minerals to form the final nickel-lithium mix that will end up in the batteries.

And if Tesla begins lithium extraction at scale, it will undoubtedly significantly decrease the price per tonne of the mineral. As of now, the extent to which Tesla will be entering the mining business is unclear. However, we will be sure to keep you posted as we get more information about the EV maker’s lithium mining plans.

So what do you think? Excited Tesla might be going into lithium mining? Do you think the EV maker should sell the lithium it extracts to other EV makers? Let me know your thoughts in the comments below.