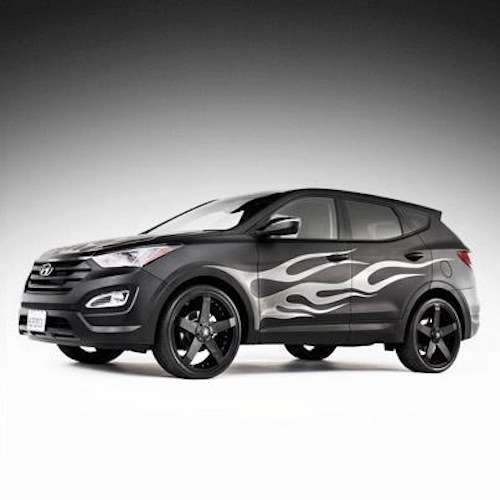 Hyundai and Rolling Stone magazine have teamed up with a contest for families to win the new tricked-out 2013 Hyundai Santa Fe.
Advertisement

Hyundai is one of the most progressive automakers and is partnering with Rolling Stone where families can enter a contest for a chance to win a fully tricked-out 2013 Hyundai Santa Fe custom Rock ‘N’ Roller. Hyundai hasn’t released any other details on the family rock n roller except that it has a cool custom paint job with flames on the sides. It also appears that the tricked-out grocery hauler has large flat-black five-spoke custom wheels to go along with the black exterior finish.

Hyundai Motor Group is one of the most progressive automakers around and they have found new and innovative ways to reach their target group of buyers. This new contest is designed for young families who are just having kids and aren’t ready to “settle down.” Hyundai is appealing to a generation who wants to know that “”having kids doesn’t mean it’s time to stop rocking, it’s just the start of a new band.”

Hyundai is innovative in their marketing

Hyundai also is promoting the new 2013 Hyundai Veloster Turbo with another unique marketing campaign. Hyundai certainly knows how to keep the car connected to its buyers. They have rolled out a series of Hyundai Re:Mix Lab events from New York City to Los Angeles to keep a demographic who will be buying their cars, connected and interested in the Hyundai 2.0 Veloster Turbo, Genesis Coupe and Elantra Coupe.

Now Hyundai is doing the same thing with the all-new 2013 Santa Fe. Families have a chance to win the new SUV that comes with a progressive new design and offers it in two flavors for rockin families. The 2013 Santa Fe comes in a five-passenger model, similar to the previous generation version, and a longer wheelbase seven-passenger, three row model. The newly designed Santa Fe is lighter and offers the highest highway fuel-economy of any SUV equipped with an automatic.

The all-new third-generation Santa Fe has been completely redesigned and weighs in 266 pounds lighter than last years model. Hyundai accomplished this by using a high application of high tensile steel at a ratio of 37.7 percent versus 7.8 percent for the outgoing model.

The all-new 2013 five-passenger Santa Fe Sport began arriving at Hyundai dealerships in August, and the long wheelbase Santa Fe is set to arrive in January 2013. Want a chance to win a custom Rock ‘N’ Roller? All families have to do is upload a photo of your family demonstrating how your family rocks, along with 500 words or less about you and your family. For more information go to: www.rollingstone.com/music/my-family-rocks