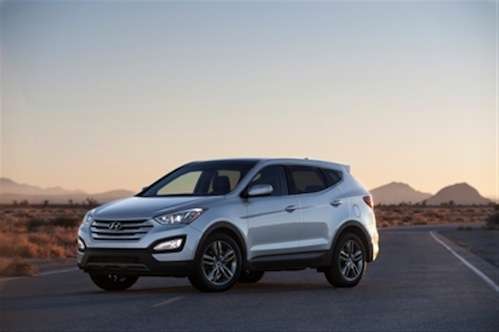 Hyundai has launched the all-new 2013 Santa Fe with a progressive new design in two different flavors for buyers.
Advertisement

Hyundai is one of the most progressive automakers in the world and they proved it by introducing not one, but two all-new 2013 Santa Fe’s. The South Korean automaker is launching the 2013 Santa Fe in a five-passenger model, similar to the previous generation version, and a longer wheelbase seven-passenger, three row model. The newly designed Santa Fe is lighter and offers the highest highway fuel-economy of any SUV equipped with an automatic.

The all-new third-generation Santa Fe has been completely redesigned and weighs in 266 pounds lighter than last years model. The Hyundai announcement says the company accomplished this by using a high application of high tensile steel at a ratio of 37.7 percent versus 7.8 percent for the outgoing model.

Three new engines will be offered

The 2013 Santa Fe lineup will feature three engine choices. The Santa Fe Sport will have two powerplant choices. A 2.4-liter Gas Direct Injection engine that produces 190 horsepower and 181 lb. ft. of torque. The highly efficient engine will get an EPA estimated highway fuel economy rating of 33 mpg with the front-drive and automatic gearbox. Hyundai can boast the highest highway fuel-economy of any SUV equipped with an automatic.

The Santa Fe Sport will also feature a high-output 2.0-liter turbocharged direct injection four cylinder. The twin-scrolled turbocharged four will produce 264 horsepower and 269 lb. ft. of torque. The 2.0-liter will get an EPA estimated 31 mpg with front-wheel-drive and automatic transmission. The additional torque should result in excellent pulling power for carrying extra cargo or for pulling uphill. Both engines offer outstanding fuel mileage and performance.

The long-wheel base 2013 Santa Fe will feature one engine. It will come outfitted with a 3.3-liter direct injected V6 powerplant that will produce 290 horsepower and 252 lb.ft. of torque. It will come mated to a six-speed automatic transmission. Estimated fuel mileage will be 19/city and 26/highway. The LWB Santa Fe is the only midsize CUV with a standard direct injection V6 engine.

Both models will feature all-new exterior styling that Hyundai calls “Storm Edge” that “captures the strong and dynamic images created by nature during the formation of a storm.” The cabins of both models also get a new look with many new luxury features and options.