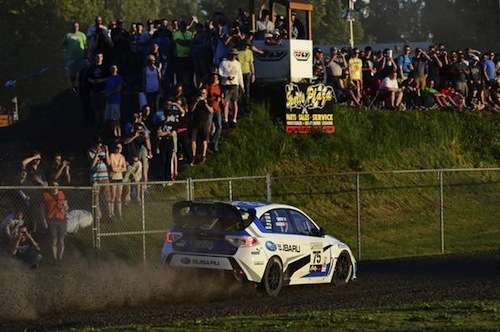 Hoonigan Racing’s Ken Block won for the first time this season at STPR as the 2013 WRX STI Subaru team made an amazing comeback to reach the podium.
Advertisement

The Susquehannock Trail Performance Rally (STPR) in Wellsboro, Pennsylvania took place this past weekend and saw some exciting action. The extremely fast and flowing Pennsylvania roads were ideal for fast runs and a good battleground for the teams. Hoonigan Racing’s Ken Block and Alex Gelsomino took their first overall win of the season. This was round four of the 2013 Rally America National Championship and Block and Gelsomino needed the win to stay in contention with the current Rally America National Championship points leader, David Higgins and Craig Drew from Subaru Rally Team USA.

The first three races have not gone well for Block and this was just what they needed. The Hoonigan Racing team took the lead from the start and never looked back. “The weekend went really well,” said Block, “The first three events of the year went really horrible for me. I am really happy to come here at STPR and have an event with some good luck.” The team held a solid lead over the second place finishers of David Sterckx and Karen Jankowski. The 2013 Subaru WRX STI finished third after an amazing comeback on Day 2.

After winning the last two Rally America rounds, Higgins and Drew started this race strong but fell behind after breaking a steering arm on stage 3. This put them in 21st place starting Day 2 after using SuperRally rules, which allows a team to compete for Championship points after a time penalty. It was a huge task, but after 9 stages, the Subaru team raced back to within 42 seconds from 2nd place. The team benefitted when FY Racing’s Adam Yeoman and Jordan Schulze’s engine seized on stage 10.

The Subaru WRX STI put on a show

Only one more mile remained, but there was too much ground to make up after being so far behind from the day before. But the #75 Subaru WRX STI put on a fantastic show for the hundreds of fans at the Tioga County Fairgrounds and did manage to make up another 15 seconds. Higgins and Drew made an amazing comeback to reach the podium with a 3rd place finish.

Subaru says, “Given where they started the day, this is a fantastic result and a testament to the capabilities of the 2013 Subaru WRX STI.” With a large points lead coming into this event, Subaru Rally Team USA continues to lead Ken Block and Hoonigan Racing in the Rally America National Championship Standings. The next event in the series is the New England Forest Rally in Bethel, Maine on July 26-27th. It's shaping up to be an exciting Rally America National Championship race season.