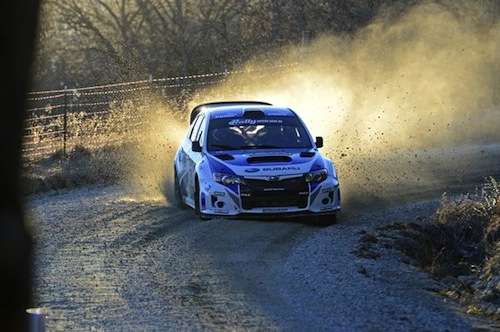 As a massive winter storm moved into Missouri just ahead of the start of the 2013 100 Acre Wood Rally Race, on Friday, it made for very snowy and icy conditions at the Missouri course. But day one saw the Subaru Rally Team USA’s WRX STI take a commanding lead of 3 minute 53 seconds over the field of 63 entered teams. SRT USA's David Higgins and Craig Drew had few concerns as they climbed into their Subaru WRX STI to start day two on Saturday.

Day one saw Hoonigan Racing's Ken Block take first position on the road posting blistering speeds to take the lead. But Block couldn’t keep his car on the course, lost control, and went through a fence on stage 6. His car suffered front end damage that ended his day. Under the same conditions, the expertly driven Subaru WRX STI Rally Team USA's David Higgins took a massive lead. Points leader Rockstar Energy Drink Rally Team’s Antione L'Estage experienced coolant problems on stage 4 and was also unable to finish the day after stage 6. Higgins was in the lead over Joseph Burke in second place.

Day two continued to be a challenge

Day two of the 2013 100 Acre Wood Rally Race saw the road surfaces continue to be a challenge for the drivers as the sun came out and warmed the course. Sections of the Missouri course turned soft and muddy while the shaded areas remained frozen and icy. The popular race was well-attended and spectators were out in force and determined to catch a glimpse of the action. Access roads leading into the event saw cars parked for more than a mile away.

Subaru team kept the pedal to the metal

L'Estage won the first race in Michigan and definitely wanted to take advantage of the snow to win his second Rally America event this year. But the Subaru team started the second day in the lead and never gave it up. The teams one worry was having to drive too slow because of the conditions on the track. Higgins said, "Anytime you try to slow down or drive conservatively you can lose your focus and make a mistake." The Subaru team kept the pedal to the metal and didn’t drive tentatively as they proceeded to more than double their lead, winning the 2013 100 Acre Wood Rally by a huge margin of 8 minutes and 51 seconds.

This is Higgins third time at the 100 Acre Wood Rally and it’s the only event in the Rally America Championship that he had not won. On Friday David said, “I hope this can be our year but at same time championships are won over the whole year, not at a single event,” This win puts the Subaru team in a great position for the rest of the season.

The win propels David Higgins and Craig Drew to the top of the 2013 Rally America National Championship points standings. Five events remain and there's plenty of racing left before the winner is crowned the 2013 Rally America National Champions. But the 2013 Subaru WRX STI driven by Higgins is certainly headed in the right direction. The season continues on May 3-5 in Portland with the Oregon Trail Rally.