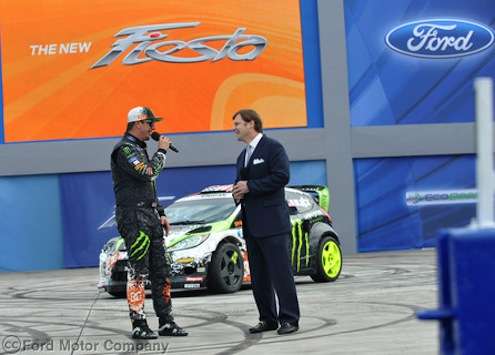 Ken Block introduced the new 2014 Ford Fiesta ST at the 2012 Los Angeles Auto Show and continues to be involved with the fastest ever small production car. Ford has enlisted Blocks driving skills at the UEFA Champions Festival four-day football celebration. Fans at the UEFA Champions Festival, taking place at the Olympic Park in Stratford, London until Sunday will be treated to special guest driver Ken Block performing four unique driving displays. Ford did not say what driving displays Block would be performing with the Fiesta ST, but we can just imagine how exciting it will be.

The all-new 2014 is a hot hatch in Europe and buyers are snatching up the fastest ever production small car on the planet in big numbers. Ford has reported 3000 orders for the new Fiesta ST all across Europe since reaching dealerships in March. The Fiesta ST is a hot hatch and can produce some exciting speeds quickly.

The new Fiesta ST translates to an exciting ride on the road or track. It’s powered by Ford’s 1.6-litre EcoBoost engine, and offers performance-tuned steering, suspension and brakes. The performance Fiesta ST sprints from 0-100 km/h in 6.9 seconds, and has a top speed of 220 km/h (137 mph). Ford’s new EcoBoost engine technology is producing fantastic results in both power and fuel efficiency. The1.6-liter turbocharged EcoBoost 4-cylinder produces 182 PS (197 horsepower) and 214 lb-ft of torque, and at the same time delivers 47.9 mpg (European combined)

Block will showcase the 2014 Fiesta ST

Ford is showcasing the Fiesta ST and Block is the perfect driver to show fans what the fastest production small car can do. “This is our largest ever presence at the Champions Festival and comes on the back of our record-breaking giveaway of UEFA Champions League Final tickets,” said Roelant de Waard, vice president, marketing, sales and service, Ford of Europe. “Just as the UEFA Champions League Final showcases the best of European football, the Champions Festival will showcase some of the best technologies from our talented line-up of Ford vehicles.”

Block will have fun driving the performance Fiesta ST and will surely entertain the crowds with his driving skills. Block who is a professional rally driver with the Hoonigan Racing Division for the Monster World Rally Team is well known in the U.S. Fans in London will get to know him and enjoy the driving displays he will put on in the 2014 Fiesta ST. He also has competed in many other sports including snowboarding, skateboarding and motocross.

Fans will also get to experience the new Ford Kuga Smart Utility Vehicle for themselves with professionally accompanied test drives that highlight Ford’s advanced technologies. Fans will enjoy Ken Block as he drives the hot new 2014 Ford Fiesta ST in London.