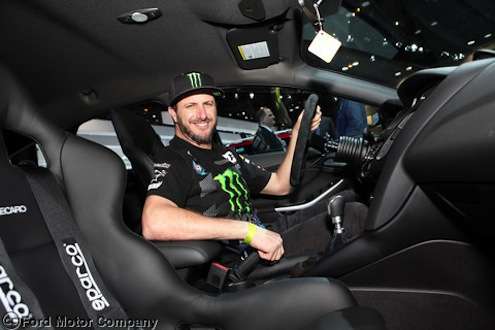 Ken Block takes his Ford Focus racer to a nether region of Russia for filming of an ad for GoPro and gets a big surprise from a female skier.
Advertisement

Ken Block was hired by GoPro to show what the video equipment manufacturer can do in extreme elements and with extreme performance. They chose to use Block’s high performance rally Ford Focus to showcase their equipment. The location is set somewhere in a remote snowy Russian region that is likely in Siberia. Why did they chose to go all the way to Russia? That we haven’t figured out yet. But the location is a great place to display GoPro's cameras and Ken Blocks driving abilities.

Block gets sideways in the trees

Block starts up the Ford Focus racer and gets strapped in behind the wheel as it sits in an isolated spot. Block takes the Focus and races through a tree-lined snow-covered trail. Block flies within feet of trees that line the road and finally ends up next to a ski lift somewhere near a Russian resort. Block can’t resist taking the Ford Focus racer down the ski slope to test its snow-going capabilities. Block has fun as he flies past a female skier and throws snow in her face. The skier can be heard yelling as she gets hit with the snow.

But it doesn’t slow up the professional race driver as he continues down the slope on a mission to take out as many of the GoPro cameras as he can. The video footage below is shot using dozens of HD capable GoPro video cameras, mounted in and on the Focus, as well as on the trees and the skiers. All the shots were done using the HD HERO2 Professional camera.

GoPro gets great footage of the car

GoPro says the HD HERO2 is "Twice as powerful in every way.” The Hero 2 has an improved image sensor to 11 Megapixels, improved low-light capability and records up to 120 frames per second. The technology in the camera can be seen as Block flies past dozens of the GoPro cameras. The HERO2 has an MSRP of $299.99 and is available with three different accessory packages: Outdoor Edition, Motorsports Edition, and Surf Edition.

Block who is a professional rally driver with the Hoonigan Racing Division for the Monster World Rally Team is well known in the U.S. He also has competed in many other sports including snowboarding, skateboarding and motocross. But he must not be known in Russia. At the end of the filming, Block and his Ford Focus racer are down the hill near the ski lodge. The female skier must not know Block is a rock star here in the U.S. She wasn’t impressed with his driving abilities and takes her frustration out on the race car. The funny spoof is a great way to finish the GoPro ad.

Watch the video clip of Block as he takes on the Russian snow and skier.