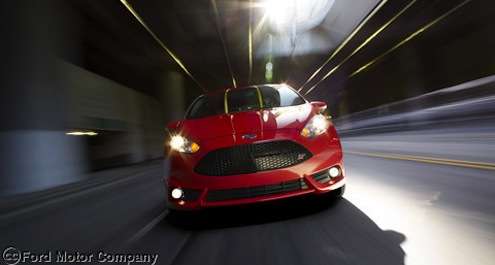 The new 2014 Ford Fiesta ST is a hot hatch with hot sales and is off to a hot start in Europe as hot-hatch buyers are flooding dealer showrooms. What do small car buyers really want?
Advertisement

If anyone thinks that performance cars are a thing of the past, we just need to look at what’s going on in Europe. Even with a sluggish economy, Europeans looking for a small car are going after high-performance. The all-new 2014 is a hot hatch in Europe and buyers are snatching up the fastest ever production small car on the planet in big numbers. Ford has reported 3000 orders for the new Fiesta ST all across Europe since reaching dealerships in March. The Fiesta ST is a hot hatch and can produce some exciting speeds quickly. Just what is making the new Fiesta ST so popular with European buyers?

Automakers know that they will have to give buyers both performance and efficiency if they want to attract buyers. Ford has designed the new Fiesta ST with even more power than the previous model. It gets 20 percent more power, but it also comes with 20 percent better fuel-economy too. The fastest production small car also gets great fuel efficiency for those who want their performance. It also offers a 20 percent reduction in CO2 emissions to 138 g/km.

The word on the street says Ford hit a home run

Word of mouth is the best advertising any automaker can have and the word on the street in Europe is that Ford is producing some exciting products. “The word of mouth on Fiesta ST has been phenomenal and it’s clear we have something special on our hands,” said Roelant de Waard, vice president, Marketing, Sales and Service, Ford of Europe. “We are really proud of our product development team for delivering a car that the top auto critics across Europe say not only is astonishingly good but also very affordable.”

The U.K., Germany and Switzerland lead the way in sales across Europe. Customers in the U.K. have bought more than half of all models sold to date, with Germany placing the next largest number of orders, followed by Switzerland. Customers can’t wait to get their hands on the small performance car. “Our showroom cars are getting a huge amount of attention, with people wanting to sit in and experience the Fiesta ST and talk about its performance,” said John Leeman, operations director, Ford Retail, the UK's largest Ford Dealer Group. “We are receiving a large number of inquiries every day.”

Performance is not dead across the globe

Global buyers are still attracted to cars with high-performance and they aren’t going away anytime soon. The proof is the sales numbers and also in the performance numbers. The new Fiesta ST translates to an exciting ride on the road or track. The performance Fiesta ST sprints from 0-100 km/h in 6.9 seconds, and has a top speed of 220 km/h (137 mph). Ford’s new EcoBoost engine technology is producing fantastic results in both power and fuel efficiency. The1.6-liter turbocharged EcoBoost 4-cylinder produces 182 PS (197 horsepower) and 214 lb-ft of torque, and at the same time delivers 47.9 mpg (European combined)

The new 2014 Ford Fiesta ST is powered by Ford’s 1.6-litre EcoBoost engine, and offers performance-tuned steering, suspension, brakes and enhanced Torque Vectoring Control; as well as Ford MyKey and SYNC with Emergency Assistance. The Europeans are telling us that buyers across the globe still want high-performance cars that are also fuel-efficient. We can look for more automakers to try and copy what Ford has done with the new 2014 Fiesta ST.