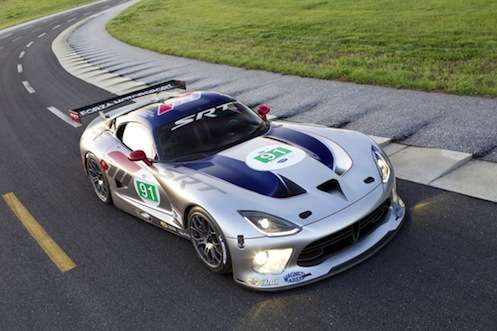 The 2013 SRT GTS-R is set to return to competition at the Mid-Ohio Sports Car Course on Aug 4 in the American Le Mans Series.
Advertisement

SRT has announced that on Aug 4, 2012, the 2013 SRT Viper GTS-R will make its racing debut at the Mid-Ohio racing circuit. The car made its official public unveiling at the New York Auto Show in April and we’ve seen test sessions of the race-ready supercar for the last three month’s. Now it’s finally time for the GTS-R to see what it can do in competition in the American Le Mans Series (ALMS).

The two GTS-R race cars that will hit the track next month will be made race ready with the help of Riley Technologies of Mooresville, North Carolina. The last time the Viper competed in the ALMS GT class was back in 2000 when the car won both the manufacturer’s and driver’s championships.

"We're thrilled to return to the world-class competition in the American Le Mans Series with our flagship American supercar," said Ralph Gilles, President and CEO – SRT Brand and Motorsports, Chrysler Group LLC. "The new SRT Viper GTS-R represents a rebirth for us on the race track. It epitomizes the best of what our new SRT performance brand represents and showcases the Viper's natural affinity for road courses. Now the time has finally come to go head-to-head with the best sports car teams from around the world."

To get ready for the upcoming race, the 2013 Viper GTS-R has completed three test sessions in the last three month’s. The supercar has been at Carolina Motorsports Park in Kershaw, South Carolina, Virginia International Raceway, and also at Mid-Ohio on July 3,4. The car was put through its paces as over 30 team members were on-hand gathering race data.

"The decision to make our debut at Mid-Ohio is a result of the progress made with our testing program," said Gary Johnson, Road Racing Manager – SRT Motorsports. "The car has shown steady performance. Each test has met and more often exceeded our expectations, so we'll see how things go at Mid-Ohio and then make a decision about the rest of the 2012 season."

A team of four experience drivers will pilot the two 2013 SRT GTS-R high-performance race cars at Mid-Ohio. Dominik Farnbacher who established a new production-car lap record at the famous Nürburgring Nordschleife last year in a Viper; Marc Goossens, who has vast experience in sports car and endurance racing, and Kuno Wittmer, who has broken numerous track records in a Viper ACR. Ryan Hunter-Reay from Fort Lauderdale, Florida, Texas, who has won three IndyCar races this season, will join the team for longer endurance races.

We will finally get to see the 2013 SRT Viper GTS-R in action on the track and see how it performs against some real competition from the Corvette C6 R and BMW’s M3 GT. You can tune in to watch the race live as it will be televised on ABC at 2:00 p.m. EDT on Saturday, August 4. The race will also be streamed live from the ALMS website.

Watch the Viper GTS-R returns to American Le Mans below.