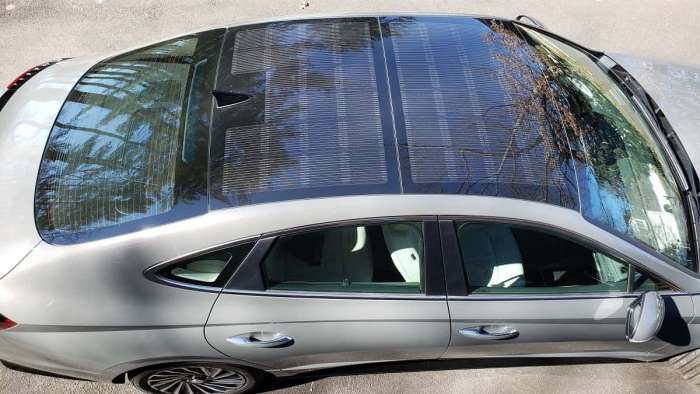 Used vehicle prices in the U.S. have jumped by more than 50% over the past year. Leading the way are affordable hybrids and a once-shunned EV.
Advertisement

It’s no secret that an inventory-constrained American vehicle market has shoppers paying more for all vehicles. On the used vehicle side, affordable green vehicles are among those that are fetching the highest prices. Some are up 50% or more in value since last year.

A new study by iSeeCars.com shows that the model that has seen the highest percentage increase in price is the Hyundai Sonata Hybrid. The Sonata Hybrid has increased in value by 64% since March of 2021. That is an increase in value of about $10,000, putting the average sale price of a used Sonata Hybrid at a whopping $25,620 according to the group’s findings. 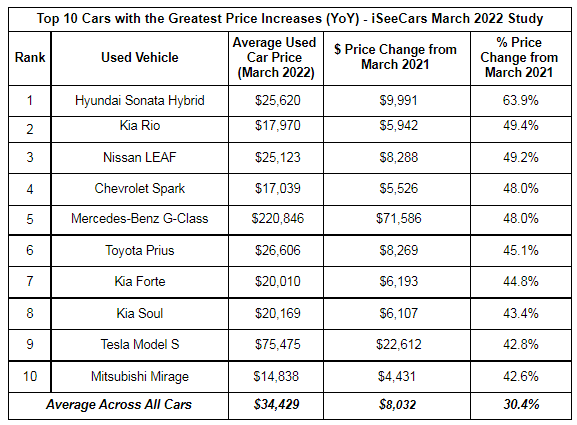 “After coming down for the second consecutive month, used car prices remain elevated due to lingering supply constraints, and could rise again due to geopolitical factors as Russia is a key supplier of materials used to make car parts and microchips,” said iSeeCars Executive Analyst Karl Brauer. “We are also seeing a significant increase in demand for used hybrid and electric vehicles as a result of high gas prices, with the cost of hybrids increasing by 40.5 percent and electric cars increasing by 36.3 percent compared to last year.”

The Sonata is notable because it is one of the few vehicles ever sold in America with roof-top solar. The only other example we can think of is the Toyota Prius. Which also makes this list.

The Prius is one of the most widely available used green vehicles. Although many were built, and the population of Prius cars on the road is among the highest overall for any fuel-efficient vehicle, its value in the used car market has risen dramatically. It is up 45%, or about $8,000 over the past year. With an average selling price used of about $26,606, the Prius is now fetching more used than new in many cases. The Prius has always been a leader in retained value, but its rise in value today is greater even than the Tesla Model 3. The Prius is one of the most reliable vehicles ever built according to Consumer Reports ratings.

Among all powertrain types, Hybrids have increased in value the most overall according to the researchers’ findings. “The rapid increase in gas prices over the past few months has led to a surge in demand for hybrid and electric vehicles,” said Brauer.

It isn’t just hybrids that are surging in price. The used Nissan Leaf has increased in value by just under $50% to an average selling price used of $25,123. What we find amazing about the Leaf’s surge in value is that the Nissan Leaf was at one time the vehicle with the highest depreciation in America. Once marginalized, the used Leaf is now highly sought after.

Two battery-electric cars make the list, including the Nissan LEAF and the Tesla Model S. “The Nissan LEAF’s price increase is likely due to the surge in gas prices as well as the heightened desirability for the redesigned 2018 model, which benefited from increased range and is now coming off lease to enter the used car market,” said Brauer

Small cars make up much of the remainder of the top-ten vehicles with the highest increase in used value. The Tesla Model S makes the list, and the ultra-low volume Mercedes-Benz G-Wagon is the unicorn on this list.

For more details on the study, and to see where your car might fall, check out the full iSeeCars.com study.

If you are shopping for a used car, tell us in the comments below if you are considering a green vehicle.