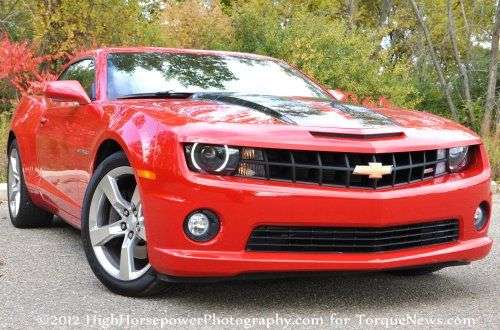 Camaro to become an American-built car in the next generation - Update, CAW angry GM is stealing its pony back

The current Camaro is built in Canada, but GM has found a way to move the Camaro home to America for the next generation.
Advertisement

The Chevrolet Camaro will be an American built car starting with the new generation. GM’s runaway success with the Camaro is primarily based on its performance and rear-drive platform. Presently, the Camaro is the only rear drive platform being built in the Canadian Oshawa plant. The Oshawa plant is about 300 miles North-East of Detroit Michigan.

The Camaro’s current generation began in the spring of 2009 as a 2010 model. Like all vehicles, the design predated its sales date, and the Camaro was in development while GM was bankrupt. In order to produce the Camaro in the plant it does, GM made promises to the Canadian government, just one of the countries whose taxpayers bailed out GM. GM can now move the Camaro to a plant that specializes in rear-drive platform manufacturing because it expects to be able to meet its commitments to the Canadian Government with its flagship Impala, which is made in Canada, along with the Equinox.

Fans of the Camaro should be pleased. The Camaro is one of America’s iconic cars and nobody who drives one considers it an import, even though it is actually not made in the United States. Camaro is also a huge sales success for General Motors. The Chevy Camaro outsells every Buick model and every GMC model except the Sierra pickup truck, which is a twin to the Chevy Silverado.

Going forward the Chevy Camaro will be manufactured alongside other GM rear-drive vehicles such as the Cadillac CTS and the new ATS in GM’s Lansing Grand River (LGR) Assembly Plant in Lansing, Michigan. Lansing is inside of the United States. A Cadillac CTS-V coupe is a vehicle remarkably close in DNA to the Camaro ZL-1 having the same drivetrain and much of the same running gear. In a press release today, General Motors stated that the change will allow Chevy to “continue to deliver top-quality vehicles as efficiently as possible.”

The Canadian Autoworkers Union (CAW) reacted angrily today at the leaked notice that the Camaro is moving to the US. CAW Local 222 President Chris Buckley was quoted as stating, "The timing of this announcement couldn't possibly be any worse. Our members are now going into the holiday season wondering what will happen to them and if they'll have jobs in the future. General Motors must now explain to our members and Canadian tax payers why they are pulling more production out of the country."

The Canadian taxpayers, via the Canadian government, were instrumental in saving General Motors and allowing it to transfer ownership stakes to the United Autoworkers Union and other entities during its unique bankruptcy. CAW National President Ken Lewenza pointed out in a press statement “General Motors has once again shown a complete and utter disregard for its workers and also Canadians in general, whose tax dollars kept the company out of bankruptcy.” Mr. Lewenza’s comments are heartfelt, but General Motors did indeed go through bankruptcy.

Camaro fans, and fans of American cars being built inside of the United States by Americans, welcome this news. Please tell us in the comments section below how you feel about Camaros being made in other countries vs the US.