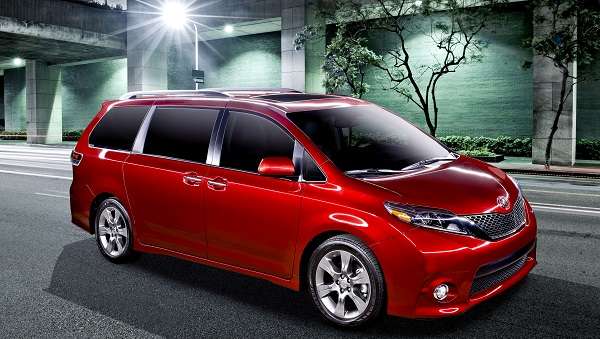 The newly-redesigned Toyota Sienna has a stack of awards that almost defies belief.
Advertisement

The 2015-2016 Toyota Sienna may well be the most awarded vehicle we have reported on these past couple years. All good vehicles pick up some awards along their way, but the Sienna’s list is not just long, but all over the map geographically and in terms of demographics. Here is a quick rundown of the new-generation Sienna’s awards we have covered. Click to open the detailed story for each.

2015 Toyota Sienna Named Best 3-row Vehicle For Families
The Greater Atlanta Automotive Media Association (GAAMA) said of the Sienna, "Our experts considered factors like styling, safety, comfort and efficiency, and the results reflect the best in both innovation and execution. The overall winner and each of our category winners are must-drive models for anyone shopping for a new family car.”

Toyota Sienna Named Family Car of Texas
This award was given by the Texas Automotive Association (TAWA). They presented the award to the 2015 model.

2015 Toyota Sienna AWD Named Best All-weather Minivan
Could a vehicle loved by Texans also be perfect for New Englanders? In the case of the Sienna, the answer is “yes.” The New England Motor Press Association (NEMPA) awarded the 2015 Sienna the best AWD minivan at its annual voting. Just for the sake of full disclosure, the author is a member of this group.

Car and Driver names 2016 Toyota Sienna a Best New Car For Growing Families
The hot-shoe car-nuts over at Car and Driver named the Sienna as the best car for growing families. Shocking that they didn’t pick the BMW M3.

Toyota Highlander and Sienna named to CarGurus' Top Ten Family-Friendly Kid-Haulers List
CarGurus liked the 2016 Toyota Sienna’s “...bonus features that will make time spent shuttling the kids a little more pleasant." The author is a contributor to CarGurus, but did not vote on this ballot.

2016 Toyota Sienna Highest Minivan In Safety – IIHS
The Sienna beat the pack in terms of safety mostly due to its advanced forward collision protection. Read the full story for more.

Sienna Tops KBB Resale Value List
In its segment, the Sienna was tops in this objective ranking of the vehicles with the best resale value

Consumer Reports Names 2016 Sienna a Top Pick
Rounding our our list is Consumer Reports. The group called the Sienna the Best Minivan and named it to its 10 Top Picks of 2016 List.

John Bell wrote on March 13, 2016 - 8:02am Permalink
"The hot-shoe car-nuts over at Car and Driver named the Sienna as the best car for growing families. Shocking that they didn’t pick the BMW M3." Haha one of the best observations about C&D ever!
John Goreham wrote on March 14, 2016 - 8:58pm Permalink
Thank you. You have to be a lifelong fan of CD to get that joke.