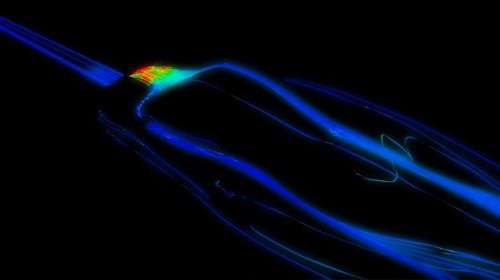 2014 Corvette design will focus on aerodynamics

The 2014 Chevrolet Corvette will enter its seventh generation officially in two months when it is revealed on January 13th.
Advertisement

Much has been learned about the car already, but Chevy has been keeping the overall look under wraps. According to today’s most recent press release and video teaser, the new Corvette has had “every line, vent, inlet and surface optimized for performance.” That could be a good thing, or it could make the Vette a little odd looking.

The 2013 Corvette “C6” or sixth generation Corvette presently has an aerodynamic drag coefficient of 0.29. That means that the Corvette is very slippery and moves through the air with great efficiency. Fuel mileage and noise may be bumped in the correct direction by reducing the drag of a car. However, drag is only half of the aerodynamics puzzle. Lift is the other half and they are often at odds. In a car as powerful as the Corvette, designed to run at speeds up to 200 mph, lift can kill you. Conversely, down-force (the opposite of lift) can press a car closer to the ground, effectively increasing cornering speeds, aiding stability and also is hugely important during high speed braking when the vehicle tilts forward (even slightly) and changes the airflow over and under the vehicle. Down-force is easy to create. Simply add a correct wing and under chin spoiler and it is done. However, the cost is high in terms of increased drag.

The real engineering and art comes in when a vehicle can achieve both a low drag, and a down-force that is helpful to stability. This is where racing comes in. Commenting on the effect, Tadge Juechter, Corvette chief engineer said “The all-new Corvette integrates more high-performance aerodynamic features than ever before, many taken directly from Corvette Racing. For example, the front grill and radiator flow paths reduce lift, improving vehicle stability at high speeds by keeping the car pressed to the pavement. In addition, functional vents increase track capability by channeling air to the brakes, as well as heat exchangers for the transmission and differential.”

Another challenge is beauty. Done incorrectly the look is “boy-racer” as many fans of rally-style hot econo cars know too well. What looks great flying over a jump in a Rallycross event, looks just juvenile when you pick up your date. At the price point the Corvette has grown into that will just not do. Kirk Bennion, Corvette exterior design manager understands this and addressed that saying “Its sculpted design excites in all the ways that a Corvette has for six decades, with elements carefully shaped in the wind tunnel to increase airflow potential and improve cooling for a system that is as efficient as possible. It’s said that form follows function, but in the case of the aerodynamic 2014 Corvette, form and function work cohesively to produce beautiful purpose.”

For a teaser video on the new Corvette design and accompanying story please click this link. Bookmark your calendar for January 13th when Torque News will bring you the look of the new 2014 Chevrolet Corvette.