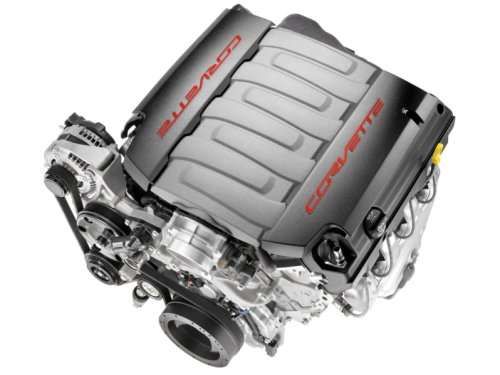 Yesterday we brought you the news that General Motors had unveiled the new LT1 small block V8 that will serve as the powerplant of the upcoming “C7” 2014 Chevrolet Corvette and today, we take a look at the specifics of that new engine – beginning with the fact that the C7 Corvette will offer at least 450 horsepower and 27 miles per gallon.
Advertisement

We have known for some time that the seventh generation (C7) Chevrolet Corvette would feature an all new V8 engine when it arrives for the 2014 model year but rumors suggested that the new Corvette engine would be smaller in displacement (5.5 liters) possibly with forced induction (twin turbocharging). However, the new LT1 V8 sports the same 6.2 liters as the 2013 Chevrolet Corvette base engine while making more power and achieving better fuel economy than the current LS3 V8.

The new LT1 V8 engine that will power the 2014 Chevrolet Corvette ushers in the 5th generation of the fabled GM small block and with this new engine lineup comes more technology than has ever been utilized on a GM V8 – which GM claims will help the C7 Corvette offer at least 450 horsepower, 450lb-ft of torque and 27 miles per gallon. For comparison, the base 2013 Corvette (C6) offers 430 horsepower and 424lb-ft of torque while reaching 26 miles per gallon so the 2014 Corvette will pack so the next generation Corvette and LT1 V8 engine will make about 5% more power while also being more fuel friendly. Granted, these figures for the new 2014 Corvette engine are preliminary and actual production numbers could vary but we can fully expect that the C7 Corvette will have more horsepower, more torque and better fuel economy than the C6 Corvette.

General Motors has stated that the “entry level” 2014 Chevrolet Corvette will dash from 0-60 in under 4 seconds. That is incredibly impressive considering that the 505 horsepower Corvette Z06 (C6) moves out from nil to 60 in 3.8 seconds.

The rumors surrounding the 2014 Chevrolet Corvette V8 engine suggested that GM would go to a smaller 5.5L engine with twin turbocharging to help allow the C7 Corvette offer better fuel economy. This would allow the Corvette to have less negative impact on the automaker’s overall fleet fuel economy figures that will have to meet the government’s strict CAFÉ laws. Instead, the new LT1 V8 engine features a larger 6.2 liters of displacement fitted with plenty of high tech engine controls to improve the fuel economy of this powerful engine.

“Our objective for the development of the all-new LT1 was to raise the bar for performance car engines,” said Mary Barra, senior vice president, global product development. “We feel that we have achieved that by delivering a true technological masterpiece that seamlessly integrates a suite of advanced technologies that can only be found on a handful of engines in the world. What makes this engine truly special is the advanced combustion system that extracts the full potential of these technologies. The art and science behind that combustion system make the Corvette LT1 one of the most advanced V-8 engines in the world,” said Barra.

The 2014 Chevrolet Corvette’s high tech combustion setup
The new LT1 V8 engine powering the 2014 Chevrolet Corvette begins with a new direct injection system, variable valve timing and General Motors’ active fuel management system. GM spent a whopping 10 million hours of analysis on this new engine program with 6 million of those hours being devoted to the high performance, fuel friendly combustion system. While this might be a high performance engine fitted in one of the most well known performance cars in American motoring history, the millions of hours of planning helped to make the LT1 V8 more powerful without compromising efficiency thanks to features that were previously reserved strictly for improved fuel economy.

“The Corvette LT1 represents the most significant redesign in the Small Block’s nearly 60-year history – building on its legacy to make one of the world’s best engines even better,” said Sam Winegarden, vice president, Global Powertrain Engineering. “More than just great horsepower, the LT1 has been optimized to produce a broader power band. Below 4,000 rpm, the torque of the Corvette LT1 is comparable to that of the legendary, 7.0L LS7 out of the current Corvette Z06. The LT1 is a sweetheart of a power plant and drivers will feel its tremendous torque and power at every notch on the tachometer.”

The 2014 Chevrolet Corvette LT1 V8 is a “pushrod engine”, meaning that the camshaft is located in the engine block rather than in the cylinder heads like Ford’s dual overhead camshaft V8 engines – similar to past GM small blocks – but that is where similarities between the LT1 and LS3 engines end. The direct injection system is the most significant addition to the new engine lineup, allowing the engine to use the fuel more efficiently while also helping to keep the new engine cool. The LT1 has a smaller combustion chamber and sculpted pistons that present a surprisingly high compression ratio of 11.5 to 1. High compression creates more heat but the direct injection system helps to subdue that heat – with this system also helping to cut engine emissions by roughly 25%. The new variable valve timing system helps to further optimize the engine output while decreasing emissions while the Active Fuel Management system allows this high performance engine to shut down 4-cylinder during light load driving.

The LT1 V8 is all-new from top to bottom
Aside from the advanced fuel delivery and combustion system, the 2014 Chevrolet Corvette V8 engine is equipped with items to make it more powerful and more efficient – along with some features working to keep the weight as low as possible. It should be noted that the LT1 is actually heavier than the current LS3 due to the addition of the things like the direct injection system but GM has made up for that extra weight in other areas.

Helping to improve the durability of the 2014 Corvette engine is an advanced dry dsump oiling system complete with piston cooling oil sprayers. This system is driven by a new variable displacement oil pump that can adjust to the driving conditions for optimal engine oiling under both calm and high performance driving. The piston cooling system sprays the underside of each piston and the cylinder walls which reduces friction and cools the combustion chambers but this system is only active during startup and while the engine is under heavy load. The dry sump oiling system prevents the oil from sloshing around during hard acceleration or cornering for optimal lubrication under any condition.

A new tri-lobe camshaft has been fitted into the new 6.2L LT1 V8, which allows the 2014 Corvette camshaft to control both the intake and exhaust valves along with the new high pressure fuel pump of the direct injection system. The camshaft of the LT1 has an .551 intake lift, a .524 exhaust lift, a 200 degree intake duration, a 207 degree exhaust duration and a 116.5 degree love separation.

The LT1 that will power the 2014 Chevrolet Corvette will be topped by a set of unique valve covers that do way more than just cover the valve stems. These valve covers house a new integrated PCV ventilation system and the coil on plug ignition system while also having three times the oil to air separation of the LS3 thanks to built in baffles between each coil pack.

Finally, the 2014 Corvette LT1 engine features a new intake manifold with integrated runners mated to an 87mm throttle body while four to one exhaust manifolds help to move exhaust gases away from the combustion chambers much like an aftermarket “header” setup would.
In closing, I should point out that the specifications of the 2014 Chevrolet Corvette “base” LT1 V8 are not official right now so production figures could vary. However, now that GM has put the figures of “at least” 450hp, 450tq and 27 miles per gallon – we can expect that the C7 Corvette that we meet next January in Detroit will offer at least those numbers. By the way, when you consider the fact that GM expects that the C7 Corvette in base form will be as fast from 0-60 as the current Z06 – it is clear that GM has done way more with the next generation of the fabled Corvette than just dress up the outside and add a new engine.

The video below offers us all our first example of what the 2014 Chevrolet Corvette will sound like – or at least what the new GM Gen 5 LT1 V8 sounds like on an engine dyno. We can expect plenty more information from The General over the next two months as the world eagerly awaits the January 13th 2013 debut of the C7 Corvette.