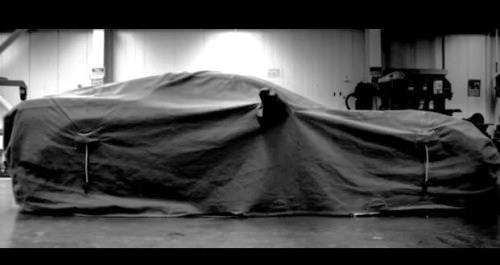 GM teases the C7 in the newest 2014 Chevrolet Corvette video

Early this morning, the folks at General Motors issued the newest official video of the 2014 Chevrolet Corvette and while this new video should be enough to get your blood pumping as we all eagerly await the debut of the C7 Corvette – GM’s new video still doesn’t offer a look at the actual car.
Advertisement

This new video, which is titled 2014 Corvette Trailer 1: Conception, is a brief 47 second glimpse into the design process behind the seventh generation of the famed Corvette. This short Corvette teaser video begins by giving us a look at the side profile of the new Corvette under a snug fitting car cover. This gives us what could be our best look yet of the top line of the C7, showing the super fast windshield and rear glass. We can also see the hulking rear quarter panels along with a bit of the front end but the cover fits much tighter out back than it does up front – making it harder to distinguish the shape of the 2014 Corvette’s front end. Around 7 seconds, the video presents about 2 dozen artists renderings of what we can presume were different early concept drawings of the new Corvette.

One of the most exciting portions of the video comes roughly 11.5 seconds in, when we hear the deep, grumbling roar of what we believe is the new LT1 V8 engine that will power the 2014 Chevrolet Corvette. This portion begins with tight shots of someone uncovering a heavily camouflaged car, followed by a blurry clip of the Corvette backing out of a garage accompanied by the roar of the LT1. From there, it is off to the GM wind tunnel where we are privy to a great many shots of the new Corvette that serve to reveal very little. However, we do get a clear (while still camo clad) shot of a molded rear spoiler (26 seconds) along with the driver’s side rear quarter panel (33 seconds). Interestingly, the wheels shown in this video differ from those shown in the initial 2014 Corvette teaser video. Click here to have a look at the first 2014 Chevrolet Corvette teaser video if you missed it before.

The video features Corvette Exterior Design Manager Kirk Bennion, who explains that a true performance car should feature a form follows function while insinuating that with the new C7 Corvette – “beautiful form follows performance driven function”. While Mr. Bennion is discussing this, the video flashes through a series of extreme close-up shots of the 2014 Corvette, both in clay design form and in the full flesh clad heavily in the wild black and white camo coverings.

The video ends with the words EVERY LINE MATTERS boldly flashed across the screen followed by the glowing red digits announcing the official launch date of 1.13.13 for the 2014 Chevrolet Corvette. The video comes to a close by showing the new, sharpened Corvette crossed flags emblem followed by the proclamation that “Nothing will be the same”.

So, 2014 Corvette Trailer 1: Conception really doesn’t show us anything that we haven’t seen before but unlike the first C7 Corvette teaser video that debuted in October, this new video offers us our first chance to hear the C7 Corvette’s LT1 engine in action – even if it is only for a few seconds at little more than idle.

We should probably point out that this is the second teaser, even though the title would lead us to believe otherwise but we suspect that the title of 2014 Corvette Trailer 1: Conception is more intended to indicate that there will be more videos over the next two months as we all hold our breath for the Detroit debut of the C7 Corvette. The gallery on the right contains still shots from the initial Corvette teaser video, with some more tight shots of the new American supercar.

Anyways...onto the good stuff! Crank up your speakers and enjoy the 2014 Chevrolet Corvette video below!