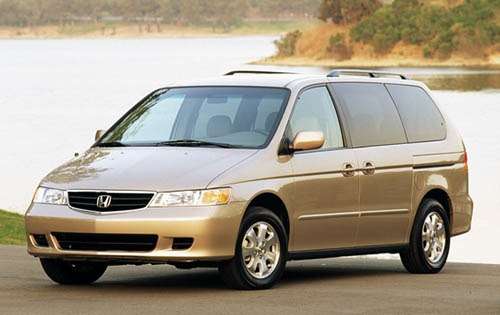 The federal government has opened a preliminary investigation into 2003-2004 Honda Odyssey minivans due to a frontal airbag problem.
Advertisement

The National Highway Traffic Safety Administration will investigate 320,000 model year 2003-2004 Honda Odysseys to determine whether the minivan should be recalled for a frontal airbag problem. The government agency has received six complaints from owners claiming that their vehicle’s frontal airbags deployed without warning without a crash. All six owners stated they were on the road when the sudden airbag deployment occurred, and three said that they sustained injuries from the incident. In addition, 41 consumers stated that the vehicle’s airbag warning light illuminated.

Honda’s airbag issue first came to light in 2011, when the NHTSA was investigating inadvertent airbag deployment in Chrysler vehicles. According to the NHTSA, Chrysler’s electronic airbag module supplier reported that certain 2003-2004 Honda Odyssey minivans use the same airbag component.

Despite sharing the same airbag module components, Honda argues that it isn’t fair to compare its situation to Chrysler.

“Since no accident or property damage caused by air bag deployment of the driver frontal air bag has been reported, and the occurrence rate is extremely low, Honda will continue to handle these claims on a case-by-case basis, per usual practice,” said Honda in a December letter to the NHTSA.

To Honda’s point, the difference between Chrysler and Honda consumer complaints is striking. In fact, Chrysler received 215 reports of improper airbag deployment, 93 of which resulted in minor injuries.

NHTSA preliminary investigations typically last between six months and a year before it decides whether to upgrade the probe to an engineering analysis. If the issue is deemed widespread enough, the government can order that a recall be issued.

The Honda Odyssey was last investigated in October 2012. The probe—which looked at 577,000 Odyssey and Pilot vehicles—was launched after 43 drivers reported instances of vehicle rollaway due to lock mechanism failure. In addition to 43 complaints, there were 16 injuries reported.