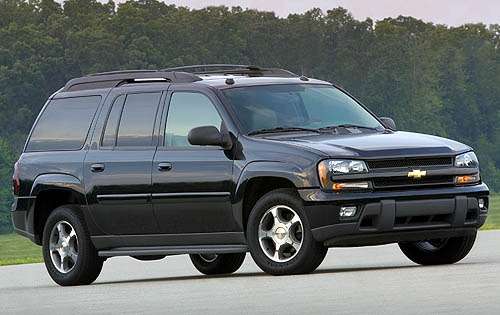 GM is recalling certain older model Chevrolet, GMC, Buick, Saab, and Isuzu SUVs due to fire concerns and is advising owners to park them outside until the problem is fixed.
Advertisement

According to the National Highway Traffic Safety Administration, fluid can enter the driver’s door model on affected vehicles, causing corrosion that may result in a short in the circuit board. The short circuit may result in the power window switches and power door locks to work intermittently or not at all. In some cases, the short may lead to overheating and/or a fire. Fires can occur even when the vehicle is not in use.

GM will begin notifying Chevrolet, Buick, GMC, Isuzu and Saab dealers July 24, 2013. Authorized dealers will test the driver’s door module on all affected vehicles. If the module is found to be functioning properly, dealers will apply a protective coating. Dealers will replace any door modules that are not working properly, free of charge.

In the meantime, GM is directing owners to park their vehicles outside until their vehicle has been repaired.

Both recalls stem from a government probe, which was launched in February 2012. According to the NHTSA, it received a total of 83 complaints, 66 claiming the door module had burned or melted, and 17 stating that window switches worked erratically or not at all. Most disturbing is that 28 reports specify that the defect led to door fires—some even occurring while the vehicle was not in operation.

As for the current recall, six fires occurred in the 231,000 new vehicles being recalled and one injury.