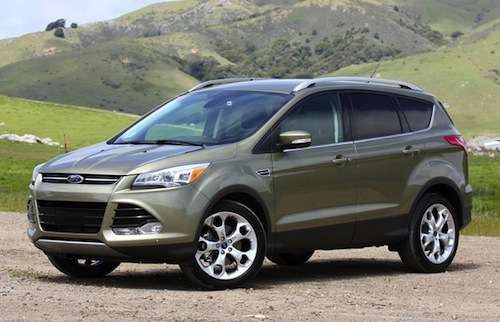 The latest recall is the second over fire issues and third overall.
Advertisement

In what seems like a case of déjà-vu, Ford has just announced the recall of 6,146 model-year 2013 Ford Escape SUVs over fire-related issues. According to the National Highway Traffic Safety Administration, certain Escape models may contain a cylinder head cup defect in which the piece may become dislodged. Consequently, this may result in a significant loss of coolant, which may ignite when combined with a hot engine. Such an event may cause a fire to set off in the vehicle’s engine compartment.

Ford told the NHTSA that there is one field report of a pre-delivery vehicle fire in Tennessee, which is believed to be related to the head cup defect detailed in the recall. Luckily, Ford has not received any customer reports pertaining to vehicle fires.

Ford will seal the existing plug and add a secondary plug cover on all Escape SUVs involved in the recall. Concerned customers can contact Ford at 866-436-7332. Escape drivers can also contact the National Highway Traffic Safety Administration’s Vehicle Safety Hotline at 1-888-327-4236 or online at www.safercar.gov.

Ford’s July recall was issued due to an issue in the engine compartment’s fuel line. Reports indicated that the defect was likely to a manufacturing error. July’s recall affected roughly 11,500 2013 Escape vehicle. At the time of the safety recall, Ford advised all customers not to drive defective vehicles until repairs were made. There were two assembly plant-related fires associated with this recall, as well as one involving a customer-owned vehicle in Canada.

Aside from the pair of fire recalls, Ford also issued a separate recall in July due to brake problems. In particular, the recall involved incorrectly positioned carpet padding. The recall involved a total of 10,000 vehicles in North America.

As a result of the numerous problems associated with the 2013 Escape, Ford announced a “special handling” offer for Escape customers in late July. Specifically Ford ordered its dealers to supply customers with a comparable rental when their 2013 Escape underwent its recall repairs. Furthermore, the automaker specified that all rental vehicles must be delivered to the customer’s residence and picked up by the dealer. Lastly, Ford instructed dealers to return the owner’s original vehicle washed, vacuumed and with a full tank of gas.

No word yet as to whether owners affected by the present recall will receive any special treatment.

Click HERE to read the recall report Ford filed with the NHTSA.