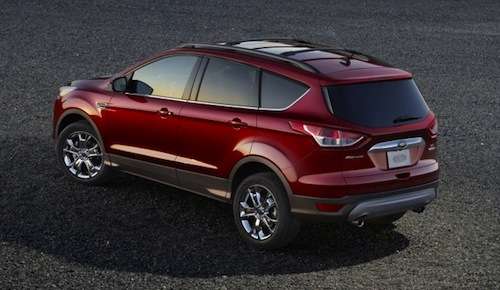 Ford is attempting to appease owners of the 2013 Ford Escape after the vehicle suffered two recalls in one week.
Advertisement

Ford Motor Co. has announced that owners of the 2013 Ford Escape, which was recalled on July 18 because of a fire risk, will receive “special handling.” Ford released the news to its dealers and the National Highway Traffic Safety Administration. Ford also made public a chronology of events that took place leading up the recall.

The informative timetable includes an under hood fire in a 2013 Escape that was driven by a Ford employee near the Louisville Assembly Plant on June 9, 2012. This is all new information because Ford originally announced the recall in a press release before posting any officially documents to government officials.

As for the “special handling,” Ford has ordered its dealers to provide customers with a comparable rental vehicle to the 2013 Escape. Said rental vehicle must be delivered to the customer’s desired address and picked up by the dealer. Furthermore, the owner’s original car must be returned to them washed, vacuumed and with a full tank of gas, after all repairs are complete. Ford will also reimburse dealers for rental costs to the tune of $36 per day, plus tax and insurance.

In regard to the June 9 incident, official documents state, “the vehicle was examined and similar units in Ford’s possession were inspected. No cause for the fire could be determined. Ford also undertook a review of field reports and warranty claims to determine if there were any fires on vehicles in customer service; no such reports were found.”

To make matters worse, a second 2013 Ford Escape “experienced a fire” on July 11, 2012. Like the June 9 fire, a Ford employee was driving the vehicle in question near the automaker’s Louisville Assembly Plant. One-week prior, on July 5, an Escape that could have potentially caught fire was discovered as it was being prepared for shipment. The vehicle was “found to have a split engine compartment fuel line which became detached from the fuel damper, causing a fuel leak, without a fire.”

The aforementioned incidents led Ford to recall about 11,500 2013 Escape with 1.6-liter 4-cylinder engines last week due to an engine compartment fuel line problem. According to official documents, the defect is likely the result of damage incurred during the manufacturing process. Affected models run the risk of catching fire if the fuel leak occurs in the company of an ignition source. Owners of 2013 Escape models should also be aware that Ford has warned customers not to drive affected vehicles until repairs are made.

Rob wrote on July 24, 2012 - 7:18am Permalink
Funny how there never seems to be any right wing commentators and shock jocks around when gas cars catch on fire.