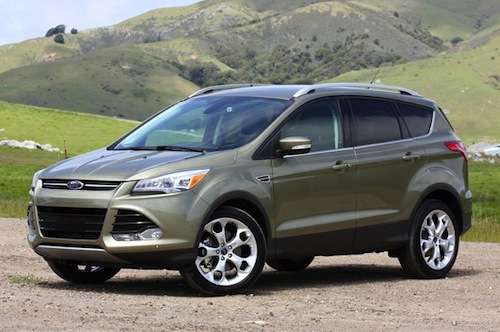 The recall affects over 8,000 models in the U.S. and more than 10,000 total in North America.
Advertisement

Ford has just announced the recall of more than 10,000 model year 2013 Escape SUVs due to brake concerns. National Highway Traffic Safety Administration documents indicate that the vehicle’s brake pedal clearance might be reduced because of mispositioned carpet padding. Consequently, reduced clearance may result in the driver’s foot coming in contact with the side of the brake pedal while transitioning from the accelerator pedal to the brake pedal. Such an occurrence increases stopping distances and the danger of a crash.

The vehicles in question were manufactured from March 8th to June 7th at Ford’s Louisville Assembly Plant. Of the 10,000 Escape models, 8,266 are affected in the U.S. There have been no accidents or injuries related to the recall reported by customers.

Ford will begin notifying U.S. customers of the recall beginning on July 23, 2012. Dealers will remove the carpet padding and left-side console trim panel, free of charge. In the meantime, owners may contact Ford at 1-866-436-7332. Concerned Escape owners may also contact the NHTSA Vehicle Safety Hotline at 1-888-327-4236 or online at www.safercar.gov. The NHTSA Campaign ID Number is 12V319000.

The news marks the first recall for the 2013 Ford Escape, but Ford has been in the headlines recently for past Escape models. Roughly seven years ago, Ford recalled approximately 470,000 model year 2002-2004 Escape SUVs to fix an accelerator cable problem. Unfortunately for Ford and its Escape customers, the recall repairs have caused an unintended problem, according to the Center for Auto Safety. In fact, the recommended repairs can easily damage the vehicle’s cruise control, leading to unintended acceleration. The recently discovered problem has already been linked to one fatal accident and several other complaints from drivers. Ford is currently investigating the issue.

As for the 2013 Ford Escape, it ranks 1 out 21 on U.S. News’ list of Affordable Compact SUVs. The celebrated SUV earned an overall 9.0 out of 10 score based on 16 published reviews and test-drives. Multiple reviewers indicate that the redesigned 2013 Escape is the best compact crossover on the market. In particular, the all-new Ford Escape earned major points for its handling, impressive fuel economy and comfortable seating. Additionally, the 2013 Escape offers a laundry list of technology features. Owners can equip the Escape with tech options like Ford Sync and sync with MyFord Touch. The vehicle also contains a class-exclusive motion-activated liftgate.

danwat1234 wrote on July 16, 2012 - 6:21pm Permalink
Check the position of those carpet protectors before each drive