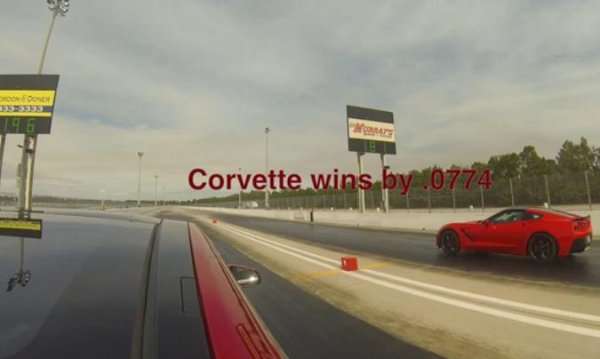 A video surfaced online recently showing a Tesla Model S drag racing against a 2014 Chevrolet Corvette Stingray and being the first to the finish line which has stirred up the Tesla fanboys who are excited at the prospect of their $100k status symbol being faster than the new Corvette but sadly- that just isn’t the case.
Advertisement

Let me start by saying that this isn’t meant to question the impressiveness of the Tesla Model S sedan. After all, the Model S has proven itself to be the best full electric luxury sport sedan in the world. Granted, it is the only full electric luxury sport sedan in the world but whether by default or based on its own merits – the Tesla Model S is unquestionably the best at what it is intended to do. Also, I’m not trying to downplay the incredible advancements in the world of the electric vehicle market or the impressive levels of performance offered by the Model S. While I am more of a fan of the American V8, I have two electric golf carts so I understand the freedom from foreign oil which leads Tesla Model S owners to be so passionate about their car. Granted, the world of drag racing is probably foreign to the vast majority of Tesla fans but getting to the finish line first means that it won a race – not that it is the faster car. If we were to follow the idea that a car getting to line first is “faster” then my electric golf cart could beat a Corvette Stingray as well if the driver was tardy enough on the start. Heck, someone on foot could outrun the Corvette if the Corvette driver wasn’t paying attention…but much like this video, that doesn’t prove anything.

However, regardless of the fact that the Tesla Model S is the best choice in a one-car segment, it just simply isn’t faster than a 2014 Chevrolet Corvette Stingray. This drag racing video shows a Model S racing against a new Stingray Coupe with an automatic transmission and on the first run, the Corvette launches very, very poorly and head start given to the Model S is enough to allow it to get to the finish line first. However, it still took the Model S 12.378 seconds to get down the track while it only took the Corvette 12.049 seconds to cover the same stretch. The awful start by the Corvette handed the win to the Tesla but it still wasn’t the faster car. Oh, by the way, on that first run the Corvette went through the quarter mile traps at 118.18 miles per hour while the Model S hit just 110.32 miles per hour. An electric car running a 12.3 quarter mile at 110 miles per hour is very impressive for an EV but it isn’t faster than the Corvette.

Tesla Model S fanboys (and probably some fangirls) are right when they boast about how impressive this all electric luxury sport sedan is as it combines emission free, petroleum free driving with very impressive performance and a plush, luxurious cabin. At the same time, those Tesla fans should stick to bragging about how many miles they can go on a charge and how their car hasn’t hit a rough enough stretch of highway to cause the car to explode into flames. If they are going to spout off about drag racing, they should at least pay attention to the fact that the car isn’t actually faster than a real sports car before claiming that it is so as to not sound like morons to those of us who have actually been to a track for some reason other than watching their high school robotics team compete with their latest remote controlled project.

In summary - the Tesla Model S is fast. It is the fastest EV sold in American. It is not faster than the new Chevrolet Corvette no matter how you spin it. Of course, that is not how everyone sees this so for the a look at a far more mild fanboy approach, click here to read John Goreham's take on this intriguing video.

Then again, for what people are spending on the Tesla Model S sedan shown in this video they could buy a 2015 Chevrolet Corvette Z06 and rather than having the fastest EV in the US - they could have one of the fastest sports cars in the world. Z06 buyers will also know that the company making their car will still exist in 25 years whereas Tesla Model S owners could soon be buying parts from whatever automaker pays the most for the Tesla brand in the next few years.

Image captured from the video above from Dragtimes.com

Weapon wrote on January 29, 2014 - 6:48pm Permalink
"I have two electric golf carts so I understand the freedom from foreign oil which leads Tesla Model S owners to be so passionate about their car" I have a gasoline powered lawnmower, So I know all about the passion of owning an engine. /s "At the same time, those Tesla fans should stick to bragging about how many miles they can go on a charge and how their car hasn’t hit a rough enough stretch of highway to cause the car to explode into flames." What in the world does that mean? "Z06 buyers will also know that the company making their car will still exist in 25 years whereas Tesla Model S owners could soon be buying parts from whatever automaker pays the most for the Tesla brand in the next few years." Nothing in life is certain. Last I checked GM and all their suppliers almost went bankrupt (Well actually GM did kind of go bankrupt and created a new company, so technically Tesla is an older car company then GM) and had to be bailed out by the government. Who says 10 years from now GM does not run into the same problem but this time around the government doesn't feel like throwing billions at them? Fact of the matter is, nothing in life is certain or guaranteed. Live for today. Look, if you want to point out that the Corvette is faster without the "human element", great. But your seriously trying to make this more confrontational then it needs to be.
Parks McCants wrote on January 30, 2014 - 1:13pm Permalink
I agree with Weapon. While I won't be test driving either car soon, I can appreciate the seamless mind boggling torque of the Tesla as it competes with the Corvette. I take the article for what it is, a tongue and cheek expose of automotive excess. Pissing away $100 K or more on an automobile is akin to a " crack" habit. Want to go fast? Buy a used Kawasaki Hyabussa...
P.S wrote on January 30, 2014 - 3:48pm Permalink
You sure are defensive about the corvette, lol. We all know it is the faster vehicle. But even that makes the Tesla impressive. You would think the vette would win by a mile. Fact is, if you lightened up the car and put just enough battery in to make the 1/4 mile, thus saving mega weight, i'd bet the Tesla would chew it up. Its about torque. Kudos to the vette and here's to the future Tesla.
Murf wrote on January 31, 2014 - 4:19pm Permalink
As a old (read 1956) "Vette" owner and the '56 is still my favorite Vette, TORQUE is the answer. Here you're matching a Sedan against a Sports Car. Try matching the Tesla against a Monte Carlo or any other sedan. Caddie does a lot of bragging, try one of them. The Tesla has immediate torque whereas the Vette has to built up to its maximum torque. What transmissions are in each, what gearing in them? What rear end ratios? What tire sizes? Etc? HEY, did either have the A/C on? :( How often would you be driving 110 or 116 mph? I did it once (124) in my '56, but it had a 440 cube 348 & B&M hydro with 2 "E" series Carters on top (like two big gas dispensing trash cans.. It got 4 mpg. Bummer, but at 1965 gas prices. It also got a ticket! Another bummer, except the "smokie" guessed me at 'only' 80 mph. It had huge torque, but the Tesla would still beat me off the line, just like a motorcycle would. The electric motor has MAX torque immediately. I wish they'd build a Sports Car. I'd not even try to pay over $100 grand for a sedan, at least not until I got older. I'm only 74 now!. :) This reminds me of when Hot Rod Magazine compared the Mustang Boss 302 versus the Camaro Z-28 302. Practically the same engines (very slight cam differences and ??) and same car bodies. The 0-60, 0-100 and the 1/4 were just about dead on for both.. How many cubes in that Tesla - ONE, maybe? The 2014 Vette looks quite good, but is the first I've really liked since the old Stingray models and still prefer the single-headlight-per-side body styles best. " Old Age is only for the brave ! ". Like a Kamakazi pilot with two targets, I pretty much agree with EVERYONE, particularly Parks and P.S. . Murf
vevans wrote on February 4, 2014 - 11:51am Permalink
Wow So the Corvette is faster to a given point but which car is fastest off the line? T-E-S-L-A
Steven McGehee wrote on July 20, 2014 - 12:29am Permalink
Though I dont really care I think the Tesla is impressive. Only thing is, if they were dfag racing, the tesla would have lost the 1st race as well. Check your video again. He went o.n yellow. He jumped and therefore made a false start. Thats why he got to the line first. Still very impressive for a high dollar golf cart lol
bill bennett wrote on December 29, 2014 - 9:57pm Permalink
New model S dual motor runs the quarter in the 11 second bracket....by by vette