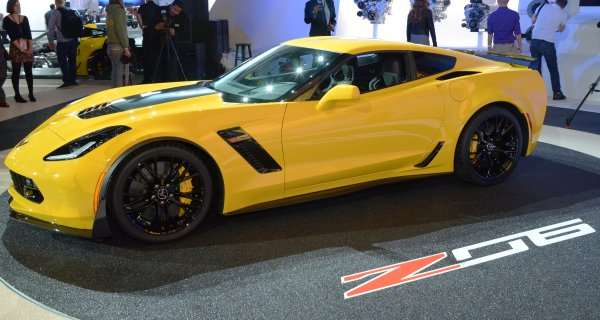 The 2015 Chevrolet Corvette Z06 will feature a new 8-speed automatic transmission which will eventually make its way into the option list for the 2016 Corvette Stingray and when it does, the high performance “base” Corvette should most certainly be able to offer better than 30 miles per gallon on the highway.
Advertisement

More importantly for GM, the introduction of the new 8L90 8-speed automatic transmission to the Corvette Z06 will eventually lead to that same high tech gearbox being an option in the “base model” Chevrolet Corvette Stingray. It is expected that the 8-speed automatic will arrive as an option for the 2016 Corvette Stingray and when it does, it will afford the self-shifting Stingray improved performance and improved fuel economy – with numbers almost guaranteed to top 30 miles per gallon.

To be clear, that is 30 miles per gallon from a Chevrolet Corvette that packs 460 horsepower…enough to rip down the quarter mile well into the 11 second range with a top speed that can near 200 miles per hour with only minor tweaks.

The combination of the new LT1 V8 and the 8L90 automatic transmission will very likely make the 2016 Chevrolet Corvette Stingray the most fuel friendly Corvette ever. The current 6-speed automatic transmission allows the 2014 Corvette Stingray to get 16 miles per gallon around town, 20mpg combined and 28 on the highway while those C7 Stingrays fitted with the 7-speed manual transmission get 1mpg better than that across the board. Introducing the 8-speed automatic in place of the 6-speed unit may not have a huge impact on the city fuel economy, but the new 7th and 8th gears should most certainly help the Corvette pick up at least 2 more miles per gallon. Even if the gearing was very similar to the ratios in the 7-speed manual, the addition of the 8th gear alone should put the 2016 Corvette into the 30mpg club.

Now, Im sure that there are plenty of people out there reading this, questioning whether or not someone shopping for a car like the 2016 Chevrolet Corvette Stingray really cares whether he or she gets 28 miles per gallon – or 30 miles per gallon. While most higher end sports car buyers likely don’t care much about fuel economy, in the current automotive industry where smart buyers look at every single metric – even those which really don’t matter and really don’t have any impact on most prospective buyers – every little advantage can help sell that next car. It is kind of like a store charging $14.98 for something instead of $15.00 even… it just looks better to the consumer.

Also, being able to boast about hitting 30mpg with a 460 horsepower car will obviously get plenty of attention and that attention can lead to new buyers each and every day.

Raymond Max wrote on March 28, 2014 - 3:31pm Permalink
Owned an LT Corvette Roadster back in 92' that would approach 30 mpg on the Freeway. I believe it had a 6 speed with a button over- under-drive. Shouldn't be a problem with today's technology. However, I doubt that most Corvette enthusiasts purchase the car for the fuel economy. Keeping your foot off of the load pedal will dramatically increase average mpg under all driving conditions.