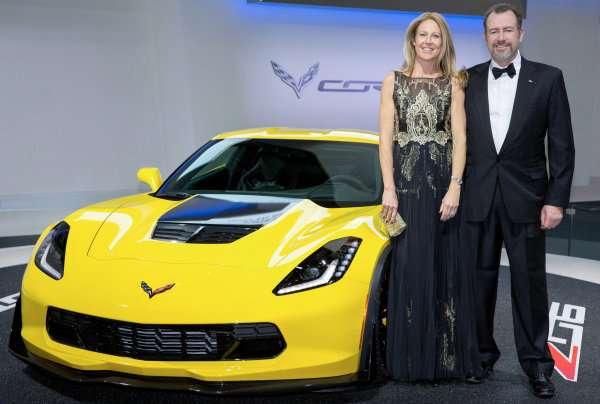 The very first 2015 Chevrolet Corvette Z06 built for public sale will be auctioned off to the highest bidder at the Barrett Jackson Palm Beach Collector’s Car event on April 12th with the proceeds of the auction going to the Karmanos Cancer Institute – and you have to think that Mr. Rick Hendrick might be among the deep pocketed collectors looking to score the first C7 Z06.
Advertisement

The 2015 Chevrolet Corvette Z06 has been billed by General Motors as being the most track capable Corvette of all time since well before the car was introduced. It isn’t the most powerful Corvette ever built, but with the advancements in chassis, suspension and aerodynamic technology, the slightly less powerful C7 Z06 should be able to outrun the C6 ZR1 that had slightly more power. This new Z06 is so incredible that it has very likely removed the need for the Corvette ZR1 and there is a good chance that GM will be quick to prove that the 2015 Z06 is the most track capable Corvette of all time – presumably at some of the most well known race tracks in the world.

“Chevrolet’s donation of the first 2015 Corvette Z06 produced is yet another way that we are showing our continued support of the Karmanos Cancer Institute,” said GM President Dan Ammann. “The funds raised from the auction will help further the exceptional patient care that Karmanos is known for in our community and across the country."

With all of that in mind, there is no question that the very first 2015 Chevrolet Corvette Z06 will be a hot collector’s item. Even if the C7 Z06 was NOT the most track capable Corvette of all time, the simple fact that it is the first of a new generation of super-Corvettes make it an instant classic and the aspect that it is the most track capable only makes this first 2015 Z06 that much more desirable. General Motors is well aware of the collectable value of the first new Z06 and as has been the case with so many other “first unit” recently, the automaker will send 2015 Z06 #1 to the Barrett Jackson Auto Auction in Palm Beach Florida. The proceeds going to support the Karmanos Cancer Institute and considering the kind of money raised by other recent first unit auctions, the first 2015 Corvette Z06 could fetch some very serious money. Also, the winner of the auction gets to pick the color so the winning bidder will also get to help decide what color this historic GM supercar will be. For ever and always, the winning bidder will be able to say “The first 2015 Chevrolet Corvette Z06 is *enter color here* because I decided that was what color I wanted it to be!” I get chills just thinking about it.

Legendary NASCAR owner Rick Hendrick has already paid $2.1 million to own the first new Corvette Coupe and Convertible so I would expect that he is prepared to spend very big money to ensure that he wins the right to own the first 2015 Corvette Z06 as well. Hendrick has become one of the top names in the collector’s car world – especially when it comes to General Motors products. Realistically, Hendrick should have deep enough pockets to outbid pretty much anyone, unless another big money collector like Jay Leno or Ken Lingenfelter gets involved in the auction. A bidding war between heavy hitters could turn into some very big money for the Karmanos Cancer Institute.

“When it comes to corporate citizenship and philanthropy, General Motors and its employees set the example,” said Gerold Bepler, M.D., Ph.D., president and CEO, Karmanos Cancer Institute. “Their generosity goes a long way toward improving the lives of cancer patients and supporting cancer research. Our heartfelt gratitude goes to GM, the GM Foundation, Chevrolet and Barrett-Jackson for their ongoing commitment to help end this disease.”

Again, 2015 Chevrolet Corvette Z06 #1 will be auctioned off at the Barrett Jackson Palm Beach auction on April 12th so if you think that you have enough money to outbid Rick Hendrick, start making your travels plans right away.