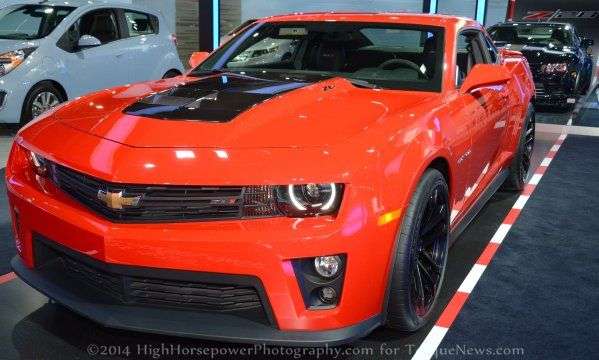 The Chevrolet Camaro enthusiasts’ community is eagerly awaiting the debut of the 6th generation Camaro for the 2016 model year and while some are expecting a radically different GM muscle car with the next generation – rumors indicate that the next Camaro might not look all that different from the car in dealerships right now.
Advertisement

The 5th generation Chevrolet Camaro which was introduced for the 2010 model year was radically different from the previous models and the same is true of the 2014 Corvette relative to the 2013 models so it makes sense that Camaro fans would expect that the next generation Camaro will be radically different from the current models. However, inside information from Edmunds suggests that those folks looking for a Camaro unlike anything that we have seen before could be disappointed when the 2016 Camaro debuts next year.

The 2016 Chevrolet Camaro will ride on a new chassis (the same platform used for the new Cadillac ATS Coupe) along with very likely packing the same LT1 V8 from the new Corvette Stingray rather than the current LS3 and L99. We know that the 2016 Camaro will technically be an all-new car inside and out so many expect that the 6th gen Camaro would have a physical appearance that is distinctly unique from the 5th gen Camaro, but Edmunds’ insider told them that the upcoming Camaro refresh wouldn’t have that much of an impact on the exterior design. Should this be true, it will come as a pretty big surprise considering that General Motors is pretty good about implementing unique styling with new Camaro generations.

On the other hand, the current Camaro has proven to be insanely popular and the Camaro has been the bestselling sports cat in America since it was reintroduced for the 2010 model year so if it ain’t broke – don’t fix it… right?

Should the 2016 Camaro strongly resemble the current 2014 models on the outside, it could really benefit the new S550 Mustang which – much to the chagrin of some Mustang lovers – has a distinct new look that has made a huge splash in the industry. Although the new Mustang has its critics, the fresh new design will almost certainly help Mustang sales surge when it hits dealerships. If the next generation Camaro styling leaves a stale taste in the mouths of American muscle car lovers, it could give Ford a huge advantage in the sales race.

While the Chevrolet Performance and Camaro enthusiast world is a dedicated group who will continue buying the new Camaro even if it looks exactly like the current generation, a 6th gen Camaro that looks too much like a 5th gen Camaro could drive those buyers who are not loyal to one brand to go elsewhere for a newer, more cutting edge look. Even if you hate the 2015 Ford Mustang, there is no question that the styling is striking and unique.

The 2016 Camaro will offer better performance, but a great many muscle car buyers are purchasing a car based on the appearance and introducing a 2016 Camaro that looks like the current models could cause those “on the fence” buyers to opt for the Ford Mustang or the next generation Dodge Challenger.