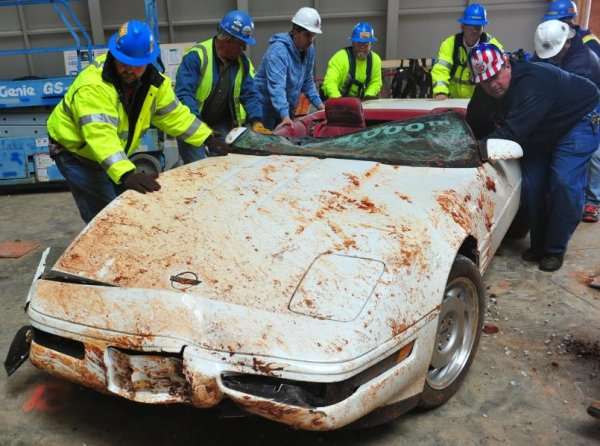 The One Millionth Chevrolet Corvette is Unexpectedly Removed from the Sinkhole

The Corvette world got a surprising piece of news today as the white 1992 Chevrolet Corvette Convertible which was the one millionth Corvette ever built was extracted from the sinkhole in the floor of the National Corvette Museum.
Advertisement

After removing the first three Chevrolet Corvettes from the sinkhole under the National Corvette Museum’s Skydome area, the team responsible for the entire project had planned to spend today examining the debris – which includes 5 more historic Corvettes – to figure out their next step. The first 3 Corvettes removed earlier this week were fully exposed, but the other 5 cars are all buried by varying amounts of debris. When the sinkhole was being examined early on by guys in baskets and the different cameras, the crew couldn’t tell just how much work they would have to do before being able to lift the buried cars out. However, once the first three were removed and the team was able to get a good look at the work ahead of them to remove the next cars – they got a very pleasant surprise. The 1992 Corvette Convertible that was the 1,000,000th Corvette ever built was in a position where it might not be too hard to remove.

"Initially there was no intention to bring the Millionth out, but as we got in there and saw more this morning we did feel like this might be our best chance," said Danny Daniel, President of Scott, Murphy and Daniel Construction.

The 1,000,000th Corvette was lodged under a portion of the floor above a small cavernous area. The car was pulled by the one accessible wheel into the cavern area where it could then be lifted and moved, upside down, to the central “floor” area of the sinkhole. Once located in the clearing area, the team was able to lower the crane cables down to lift the white 1992 Corvette Convertible by the driver’s side wheels just like the Ruby Red 1993 40th Anniversary Edition Corvette. Finally, as the car was lifted up and out of the hole to the set-down area, it was set back on its wheels for the image above was taken.

As you can see, the 1,000,000th Chevrolet Corvette ever built has been inflicted with a serious amount of aesthetic damage but the National Corvette Museum statement indicated that the damage wasn’t as bad as it looks. Really, in looking at the picture above, it appears as though the front fascia is damaged along with the windshield and its frame, but the hood, fenders and driver’s side door don’t appear to be in all that bad of shape.

"The Millionth Corvette has been through a lot, but the damage at first glance seems to be less extensive than what it could have been, especially given the precarious spot the car landed," said Bob Hellmann, Facilities and Displays Manager at the Museum. "The undercarriage and frame look to be in good condition and everything is repairable."

Now that the 1,000,000th Corvette is up and out of the sinkhole, it will join the 1962 Black Corvette, the Ruby Red 1993 40th Anniversary Edition Corvette and the 2009 Corvette ZR1 Blue Devil Prototype in the special “Great 8” cars – offering museum visitors a chance to see these tragically damaged American sports cars before they are shipped to Michigan for full repairs later this year.